On a drive through the Mojave and Death Valley, T+L discovers abandoned mining towns, strange wildflowers, and canyons that change colors in an instant.

Barreling down Nevada Highway 374 toward Death Valley National Park and a lemon drop of a sun, it occurred to me that the principal allure of the desert is that nothing quite normal survives there. Take the Goldwell Open Air Museum down the highway, just outside Beatty, Nevada. Here, on a lonely stretch of private land, for no particular reason, rest half a dozen outsize sculptures, including a 24-foot oxidized steel miner, pick in hand, standing next to a penguin.

This was the first of many odd sights we would see over the course of a week as my wife and I embarked on the mother of all desert drives: an 800-mile loop that would lead us from Las Vegas northwest to Death Valley, then to the Mojave National Preserve and back to Vegas.

After entering Death Valley four hours and 150 dusty miles later, we noticed an even more jarring example of anomalous survival: the vivid yellow-and-red spring wildflowers that erupted in clusters amid the desert holly and creosote bushes on either side of the road. It is considered a high honor to see these miracles — or freaks, as the case may be — of selective adaptation, and we were suitably thankful. As the old saw in these parts goes, Death Valley isn't really dead and it isn't really a valley, which is why it is a must-drive for any dedicated road-tripper.

We settled in at the Oasis at Death Valley, which sits in the center of the national park. It's a remarkably well-run place, considering that it has no competition for several zip codes in every direction. The stucco buildings with orange tiled roofs are set around a lush garden of date and fan palms near a warm-spring-fed pool. It wasn't the Hotel California, but the song did start running through my mind.

We turned south the next morning on California Highway 190, a convenient spine to follow for all your Death Valley sightseeing. In arid, 70-degree temperatures (early spring is the best time to visit, not only for the flowers, but also for the temperate weather, as it can get as hot as 120 degrees in summer and as cold as 3 degrees in winter), we took a ranger-guided tour of Golden Canyon and marveled at the multicolored layers of sedimentary deposits that had begun forming millions of years ago. We then headed farther south to Badwater, the lowest point in the U.S. at 282 feet below sea level, from which we had a clear view of the park's highest point, Telescope Peak. At 11,049 feet, it towers above the surrounding mountains.

There is no moderation here — the valley's Eureka sand dunes are believed to be some of the tallest in the U.S. — and something about the extravagant, paradoxical, and capricious extremes of Death Valley seems very American. Small wonder that every other voice we heard was speaking a different language. A staffer at the Oasis told me that Europeans comprise a large portion of the visitors. "They even come in the summer when it's 125 out," he said. "They don't seem to mind. To them, this is the Wild West, and the Wild West is America."

After another 100 miles, we found ourselves road-weary, so we stopped at what many consider Death Valley's pièce de résistance, a natural formation called the Artist's Palette, just as the light was beginning to drain from the sky. Depending on where you stand, this series of sharp, canted cliffs of bubblegum-pink granite, hunter-green-and-black lava, and vanilla-milkshake-white sandstone does indeed look like a palette — or, actually, more like an ever-changing, digitalized O'Keeffe that would locate some new variation of its colors with the slightest movement of the sun or a cloud.

We left the park the next morning via 190, north through Towne Pass, in the Panamint Mountains. It was an arcing, twisting trip past razor-sharp peaks that led to territory more from the Desert 101 textbook: flat, dusty, hot, boring. Finally, we reached the small town of Trona. A local back in the valley had described the desolate burg this way: "If you were scouting a site for a movie about post-apocalypse America, this would be your choice," he had said, and he wasn't exaggerating. I swear, we didn't see another living being as we passed the town's golf course, its two smoke-belching factories, and a big, deserted-looking gas station.

Next, we stopped off at the Calico Ghost Town, a restored 19th-century mining town-turned-tourist attraction. The train ride around the park was a nice trip down the Old West's memory lane, but nothing like what awaited us at our final stop, 55 miles north on I-15: Baker (population 914) and the Mojave National Preserve. Baker continued the Twilight Zone motif nicely. The only hotels in the town, the Royal Hawaiian, the Wills Fargo, and the Bun Boy, have all shut their doors since our trip.

The friendly lady who checked me in at the Bun Boy wanted to sell me a lotto ticket along with the room, but I demurred, though I later heard that this single motel/convenience store had more lotto winners than any in the state. Inside room No. 103, we found an oversize bed, a TV with limited cable service, an enchanting view of nearby I-15, and a hand-printed sign on the back of the front door: "Please keep door closed. Snake spotted."

Nothing in the Mojave National Preserve could quite match this experience, though the nation's largest Joshua tree forest came pretty close. A trudge up and down the preserve's 45-square-mile Kelso Dunes — one of the largest dune fields in the country — wasn't something you get the chance to do every day. We capped the day off at the Mad Greek Café, across the street from the Bun Boy Motel. We had two excellent Greek salads seated in the shadow of a plastic statue of Hercules in a restaurant out in the middle of the California desert.

The snake never appeared, and by the next morning we were ready to leave the Mojave as anonymously as possible. But the desert has its own rules. When the clerk at the Bun Boy took my key back, she asked again if I wanted a lotto ticket. I hesitated, and then heard myself say, "Sure. What the hell?" The payoff of a road trip through the Mojave is that you just can't leave without taking some of it with you.

February and March are cooler than most months and are the best time to see desert wildflowers.

The Oasis at Death Valley (formerly Furnace Creek Resort) Hwy. 190, Death Valley, Calif.; 800/236-7916. The stucco buildings with orange tiled roofs are set around a lush garden of date and fan palms near a warm-spring-fed pool.

Mad Greek Café 72112 Baker Blvd., Baker, Calif.; 760/733-4354. Watch for the exuberantly tacky billboards for the Mad Greek. The silly Greek restaurant is surrounded by plaster statues, but the draws are its delicious lamb dishes and fresh strawberry shakes.

Mojave National Preserve 760/252-6100; free admission. Take a scenic drive through the Joshua Tree Forest. Trudge up and down the preserve's 45-square-mile Kelso Dunes, one of the largest dune fields in the U.S.

Death Valley National Park 760/786-3200; entrance fee $30 per vehicle. Death Valley is the hottest and driest of the national parks in the U.S., and the largest in the lower 48 states. More than one million visitors come annually, many to bird watch the 100-plus species that have been spotted here.

Goldwell Open Air Museum 1 Golden St., Beatty, Nev.; 702/870-9946; free admission. Here, on a lonely stretch of private land, for no particular reason, rest half a dozen outsize sculptures, including a 24-foot oxidized steel miner, pick in hand, standing next to a penguin. 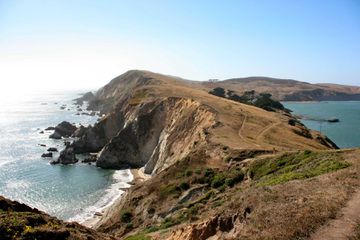 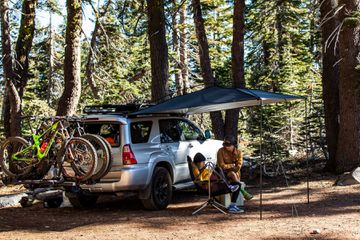