Everything You Must Do at Star War's: Galaxy's Edge, According to a Disney Imagineer

Star Wars: Galaxy’s Edge has been welcoming visitors to the land of Batuu to live out their own intergalactic experiences since opening last summer at Disneyland in California and Walt Disney World in Florida. From the themed food and beverage offerings to the ambitious attractions, Galaxy’s Edge is incredibly immersive and interactive. Travel + Leisure had the chance to experience this land first-hand for the opening of the new Rise of the Resistance attraction, and we sat down with Scott Trowbridge, Star Wars portfolio creative executive from Walt Disney Imagineering, for the inside scoop on the Galaxy’s Edge experience.

When designing Galaxy’s Edge, Imagineers considered recreating one of the iconic settings established in the films, but instead, they decided to set the land on the planet Batuu — a land that’s always existed within the Star Wars universe but has never actually been shown in the films. According to Trowbridge, this setting allows guests to experience their own Star Wars adventure instead of trying to follow in the footsteps of their favorite characters.

There are several experiences every guest should have in Galaxy’s Edge, according to the Imagineers who created it. Of course, the rides are incredible (and they’re both “must-do’s” in our book), but Trowbridge recommends a few other can’t-miss experiences for guests visiting Galaxy’s Edge. He says everyone should try the themed food, interact with the cast members (who have their own backstories), and take time to simply wander the land for a truly immersive experience.

The Imagineer advises guests to take their time exploring the land, saying, “that sense of exploration, curiosity, and not knowing what’s around every corner is what makes it more compelling and more immersive.”

When describing the process behind the creation of Galaxy’s Edge, Doug Chiang, the vice president and executive creative director of Lucasfilm, said, “Star Wars design is grounded in reality, and we’re creating a place that is believable, authentic, and real. Then we exaggerate that reality and add in a distinct visual vocabulary to turn the ordinary into something extraordinary.”

To create a land that combined this authenticity with Star Wars fantasy, Imagineers traveled to Morocco and Turkey to take inspiration from their markets and architecture, and they visited live Star Wars film sets and studied old movie props to make sure everything — down to the trees planted in the land — felt authentic and true to the films.

Imagineers also worked to combine different aspects of the Star Wars universe, incorporating details from the classic films, video games, animated series, and more, so that guests could bring their own knowledge to the experience and share it with their friends and family. As a result, Trowbridge says they’ve created an intergenerational connection that allows people to share the details that resonate with them, creating a rich and interactive experience. 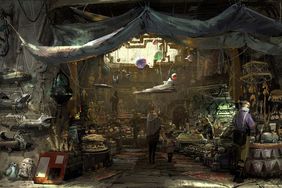