Watch Magic Happens — Disneyland's newest parade — from the comfort of your home.

Need an extra dose of magic today? Look no further. With the Disney parks now closed indefinitely due to the COVID-19 pandemic, the company is making an effort to bring them home to you. This weekend, Disney presented a virtual viewing of the new Disneyland parade, Magic Happens, in a blog post.

In the post, Michael Ramirez, the public relations director of Disneyland Resort, said, "This daytime spectacular celebrates the awe-inspiring moments of magic that are at the heart of so many Disney stories. We hope you'll gather with family at home to watch this stunning moment of magic."

Magic Happens debuted at Disneyland Park in February, and it's unlike any parade you've seen before, mixing beloved stories with contemporary design and music co-composed by Todrick Hall. The event includes energetic dancing, bright costumes, and stunning floats featuring Disney characters from classic films like "Cinderella" and "Sleeping Beauty" and new favorites like "Frozen 2" and "Coco."

This Sweet Video Will Remind You Why You Love the Disney Parks, Even While They're Closed

It kicks off with a colorful sorcerer Mickey aboard a celestial float, followed by Moana riding an LED wave float while "How Far I'll Go" plays. The "Coco" section of the parade is up next, featuring one of the most visually stunning floats, with a carnation bridge that connects Miguel to his ancestors.

Experience Disney Parks Around the World With These Virtual Rides

Next, you'll see Anna and Elsa on a larger-than-life "Frozen"-inspired float, complete with red-leaved trees and beautiful ice formations. After a "Let It Go" and "Into the Unknown" mashup, classic Disney characters like the Fairy Godmother, Tinker Bell, and Genie precede Cinderella in a beautiful gilded pumpkin. You'll also see floats depicting scenes from "The Sword in the Stone," "The Princess and the Frog," and "Sleeping Beauty."

Whether you're five or 75, this cheerful and vibrant parade is sure to brighten up your day. Disney will continue to share #DisneyMagicMoments via the Disney Parks blog while the parks are temporarily closed. 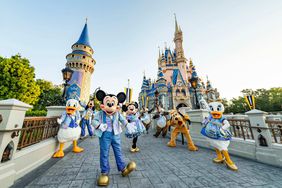