Over the last year, Disney has released exciting new details about the immersive two-night experience that invites guests of all ages to become the main character in their own Star Wars story. The experience will start before guests even step on board the Halcyon starcruiser — they'll check in at the Galactic Starcruiser Terminal, then enter a launch pod that will carry them (through hyperspace) to the ship. Then, it's time for the real action as guests dive into the interactive experience, where their choices determine their stories (so you better think twice before forming an alliance with the First Order). There will be lightsaber training, lessons on the starcruiser's systems, and appearances from characters like Chewbacca, Kylo Ren, and Rey. Intergalactic travelers will even take a planetary excursion to Batuu.

That's right — as a part of this innovative experience, guests will take a trip to Star Wars: Galaxy's Edge at Disney's Hollywood Studios. This intricately themed land is one of Disney's most immersive — cast members use greetings like "bright suns" instead of "hello," Stormtroopers roam around looking for troublemakers, and you can try intergalactic dishes and drinks that you won't find anywhere else in the parks.

So, what will the Star Wars: Galactic Starcruiser experience cost? A family of four can expect to pay nearly $6,000 for the experience. The price includes two nights in a cabin or suite, meals, entry into Disney's Hollywood Studios for your trip to Galaxy's Edge, and valet parking. And while Galaxy's Edge offers a taste of the gritty planet Batuu, the Halcyon promises a more refined and glamorous experience while you travel through the galaxy.

Guests can visit the Disney World website to find more details and sign up to receive updates about the experience. 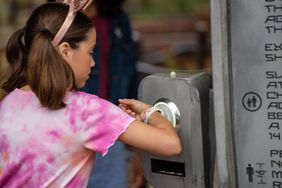