Everything You Need to Know Before Visiting Disneyland Paris

If you’ve never thought about taking time on your overseas trip to do some Disneying, the reality of it may surprise you. Sure, we have Walt Disney World and Disneyland back home, but when it comes to foreign parks, you really can’t experience it anywhere else in the world. Disneyland Paris, after all, is home to the stunning Sleeping Beauty Castle, offers a Finding Nemo roller coaster, and even lets you step inside the world of Ratatouille. Those bistros in Paris may offer some delectable food, but guaranteed, none will shrink you down to the size of a beloved rat.

While Walt Disney World usually requires a special trip, Disneyland Paris’ two side-by-side parks are convenient to tack on to a London jaunt or a visit to France. At only an hour outside of Paris and accessible by train, it makes for an easy day trip or quick overnight without impacting your travel plans too greatly.

Wondering how to pull it off on your next European vacation? Here’s how:

Ride the Disneyland classics that are back home

Though they seem like carbon-copies from the outside, they are completely different once you get past the queue. Pirates of the Caribbean, offering a noticeable lack of Johnny Depp look-a-likes, feels gloriously trapped in time. It’s A Small World includes an homage to California and New York that doesn’t exist at parks back home, and even their version of Haunted Mansion, Phantom Manor, deals more with evil Halloween-esque spirits than grim grinning ghosts. Prepare the little ones, too—Casey Jr. Circus Train is more of an exciting roller coaster than a slow-moving train at this park.

Don’t skip out before the night’s over

Disneyland Paris’ stunning evening show Disney Dreams is easily one of the best worldwide, mixing water effects, fireworks and digital projection onto a hilltop Sleeping Beauty Castle in a way American parks never have before. You won’t want to miss a second of it, so be sure to find a place at least forty minutes before it begins and grab snacks and drinks early, too. (There are few nearby stands and navigating the crowd can be tricky.) And, of course, don’t miss seeing their version of Tomorrowland, which is Jules Verne-inspired and dubbed Discoveryland, all lit up and glowing in the evening sky.

Food options can be limited when it comes to meals, particularly at Walt Disney Studios Park, where restaurants can be closed and kiosks mostly sell muffins, chips, and ice cream. Plenty of locals bring their own sandwiches and snacks for a day at Disneyland, which isn’t frowned upon in the least.

Note the differences between French and American parks.

Like Disneyland, there are two standalone parks here—Disneyland proper, and a second park, Walt Disney Studios, which is most similar to Disney’s Hollywood Studios in Florida. Not many rides offer FastPasses, but wait times posted are generally longer than the actual wait, which is wonderful. There are a lot more thrill rides at Disneyland Paris, too, yet coasters here are significantly more rough, particularly a reinvigorated Space Mountain: Mission 2, which goes upside-down in this park’s iteration. Character meet-and-greets are often listed as “Goofy or friends,” thus not guaranteeing appearances, but it absolutely works out in guests’ favor. Because of this, you may even get a photo with two characters at once, a rarity at parks back home.

Plan in advance how you’ll get there

If you’re flying into Charles de Gaulle airport, you may want to head straight to Disneyland Paris before traveling to the city, or do so on your way back, which is most convenient. If your international travels are lengthy and the train isn’t preferred, there are car services available for advanced hire that will easily take you to and from the airport or central Paris, too. The grounds are accessible by train and can make for a simple day trip, whether or not you’re coming with bags. Disneyland Paris even offers a luggage checking onsite, just outside park entrances, for a quick visit pre-flight.

Choose value over time, or vice-versa

Disneyland Paris’ hotels can be significantly expensive for American guests, even compared to Walt Disney World in Florida. The beautiful, beckoning pink Disneyland Hotel offers direct access to the park, but may blow your entire trip budget. There are plenty of affordable surrounding hotels affiliated with the parks that offer easy round-trip transportation to the grounds, but come at one fault: they don’t include Disney hotels’ two Extra Magic Hours in the park each morning, a significant advantage in tackling the parks sans crowds.

Soak up everything that’s exclusively French at Walt Disney Studios

The spectacular Crush’s Coaster, a dark ride that twists and whips guests around as they travel through Finding Nemo’s East Australian Current, only exists here. (It is massively popular for good reason, and the line creeps up throughout the day, so ride it early as you can!) There’s an entire Ratatouille-themed land, too, housing Remy’s own restaurant as well as the magical Ratatouille: The Adventure, which utilizes Disney’s trackless technology which has only begun making its way stateside. The Toy Story-themed land is superb, and not only is CinéMagique a reliable air-conditioned break for tired tykes, the show is wildly entertaining and easy to understand despite language barriers thanks to its star, Martin Short.

Check the closure schedule prior to arriving.

If visiting before Disneyland Paris’ 25th Anniversary celebrations in 2017, be sure to check which rides and attractions may be closed at either park. Attractions have been experiencing updates and refurbishments since 2015, and have individual closure schedules. If there are one or two rides you’re most excited about riding, be sure to check the website first, and if you’re visiting in mid-to-late 2017, gear up for what will be a grand celebration on newly renovated grounds. 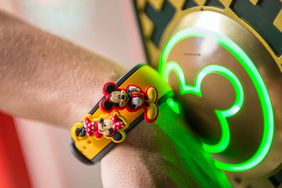