Disney is all about the details.

Sure, every Disney fan knows that the rides, snacks, and the parks themselves are meticulously designed and maintained so visitors can be delighted at every turn, but did you know that this very thoughtful mentality also extends to the park’s staff as well?

Take, for example, the fact that Disney park employees are banned from ever pointing with just their index finger.

Sure, it may seem like a minute detail, but as it turns out there are two distinct conspiracy theories on why park employees are mandated to do the “double Disney point,” including Walt Disney’s smoking habits and simply being polite.

As the Independent explained, the two-finger gesture is likely still used today because a single pointed finger can be interpreted as rude to several cultures, including in the United States.

However, according to HuffPost, the move could also be an odd homage to Disney himself, as the animator used to have quite the penchant for smoking.

This Is the Hottest Souvenir at Disney Parks This Christmas

According to an anonymous Disney employee, the gesture harkens back to when Disney use to walk through his eponymously named park, cigarette in hand, pointing out different areas of the park to guests with two fingers stretched out. The park employee added that “the two-finger point is part of our training upon being hired in.”

And the story may even have merit. Tom Hanks, who played Walt Disney in “Saving Mr. Banks,” shared with Ellen DeGeneres on her talk show in 2013 that there are indeed old photographs of Disney holding a cigarette and pointing in the park in the same way. However, in recent years the brand has attempted to disassociate itself from smoking and has even gone to great lengths to photoshop cigarettes out of Disney’s hands, Huffpost reported.

Next time you’re in a park test it out and ask an employee for directions. Odds are they’ll give you the old double finger point. 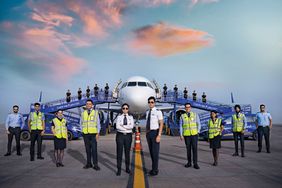