Make your next Disney vacation extra magical when you stay at one of these hotels near Disneyland.

One of the first steps in planning a Disneyland vacation (other than deciding which iconic attraction you'll visit first) is booking a place to stay. There are many, many hotels in Anaheim, so narrowing them down to find the best choice for your magical trip can be tricky, but don't worry. We've rounded up seven of the best hotels near Disneyland so you can book your room and get back to mapping out the important things, like which Mickey ears you're going to wear or how many churros you're going to eat.

There are three on-property Disneyland hotels — the Disneyland Hotel, Disney's Paradise Pier Hotel, and Disney's Grand Californian Hotel & Spa. These hotels are close to the Disney theme parks — Disneyland Park and Disney California Adventure Park — and Downtown Disney, a shopping and dining complex just outside the park gates. They also offer Disney-themed experiences you won't find at non-Disney hotels (think: character breakfasts and hidden Mickeys in the decor). Of course, a nearby hotel can offer other benefits, including more affordable rates, and many of them (including the four we've listed below) are still within walking distance of all the Disneyland fun.

Here are seven of the best hotels near Disneyland.

With its beautiful, Craftsman-style decor, fantastic dining options, and super-close proximity to the theme parks and Downtown Disney, Disney's Grand Californian Hotel & Spa is arguably the best Disneyland hotel. It's location is unbeatable — you can hop out of bed, have breakfast with Mickey Mouse and friends at Storytellers Cafe, and then exit the hotel directly into Disney California Adventure Park. Other hotel highlights include expansive suites with theme park views, the upscale Napa Rose restaurant, and three beautiful pools. This year, the hotel's new Imagineer-designed Tenaya Stone Spa opened, offering a variety of services in a peaceful setting inspired by California's heritage and nature. Of the three on-property Disneyland hotels, the Grand Californian is the most luxurious and convenient to the theme parks and Downtown Disney, though it's typically more expensive, too.

Disney's Paradise Pier Hotel takes inspiration from California's iconic boardwalks with beachy decor in guest rooms (some of which offer theme park views) and public spaces. Three dining locations, close proximity to the parks and other Disneyland resorts, and a pool terrace — featuring a waterslide and a children's pool — make this a cheerful and convenient place to stay during your Disneyland vacation.

Disneyland Hotel was the first of the three on-property hotels at the California theme park resort. It has a Disneyland Park theme, with towers named after the park's original lands, as well as several signature themed suites: Adventureland, Big Thunder, Fairytale, Pirates of the Caribbean, and Mickey Mouse Penthouse. Kids will love the monorail waterslides, the retro-themed pools, and character dining with Goofy and pals, while adults will appreciate cooling off with a rum cocktail at Trader Sam's Enchanted Tiki Bar. The hotel is located at one end of Downtown Disney, so you can easily walk to the shopping and dining area or the theme parks from here.

JW Marriott, Anaheim Resort opened just last year, but it's already a popular choice among travelers looking for an upscale option within walking distance of the Disneyland theme parks. Guest rooms are beautiful, modern, and comfortable — we recommend booking one with a theme park view. Other amenities include a rooftop bar (where you can spot Disney fireworks) and a pool. The hotel is located right at the Anaheim GardenWalk, another shopping and dining center, and it's just about a 15-minute walk from the theme parks.

Anaheim Marriott is another great option for travelers visiting Disneyland. Guests can expect modern guest rooms, thanks to a 2018 redesign, and there are three dining options (including a design-your-own-pizza eatery) on the property. The hotel is close to the Anaheim Convention Center and within walking distance of Disneyland.

With its own water park and family-friendly room layouts, Courtyard Anaheim Theme Park Entrance is ideal if you're traveling to Disneyland with younger kids. The hotel offers rooms with bunk beds in addition to king or queen beds, so everyone has space to get cozy after a long day of rides and character meet and greets. The Surfside Waterpark has six slides and a splash area, plus a pool and hot tub. Plus, like the other hotels on this list, the Courtyard Anaheim Theme Park Entrance is just a short walk from the Disneyland theme parks.

Another new addition to the list of hotels near Disneyland, The Westin Anaheim Resort opened just this year. The upscale property offers a number of unique dining options, including a Mexican restaurant, steakhouse and wine bar, and a rooftop lounge. There's also a pool and sleek fitness center, and the hotel is just a walk away from the action at Downtown Disney as well as the theme parks. 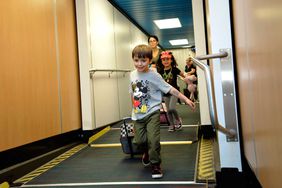 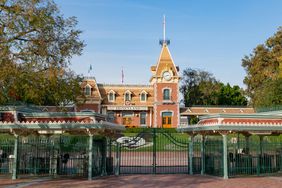 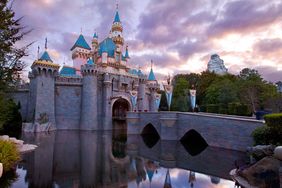 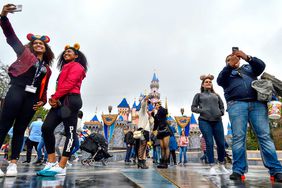 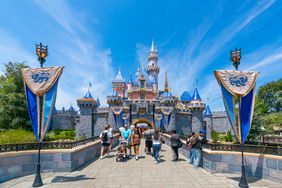