You can also win a private Mumford & Sons concert, a meet and greet with the Doctor Who cast, and more.

Some experiences just can’t be bought, like a breakfast with Sir David Attenborough or a private Mumford & Sons show. But thankfully, they can be won.

This year, Comic Relief is offering what representatives say might be its greatest prize yet — a breakfast for one lucky winner and their guest with Sir David Attenborough at London’s Natural History Museum.

The winners will meet Attenborough at the attraction before it’s open to the public at 8:30 a.m. to enjoy a breakfast of tea, coffee, fruit juices, pastries, and fresh fruit before touring his favorite exhibits together.

The prize is open to applicants over the age of 18, though the guest of the winner can be younger than 18 if the winner happens to be their parent or legal guardian.

The winner will be notified by April 15 and will have to respond back within two days or they risk their spot being taken by a randomly selected winner. They can then choose to schedule their breakfast for a date within 12 months of the drawing.

Everything You Need to Eat on Your Next Trip to London

Other prizes include breakfast for a winner and guest with Jodie Whittaker and Mandip Gill of Doctor Who to chat about the show before stepping on set and meeting the rest of the cast (this prize is only open to U.K. residents).

You could also hang out with Tom Hiddleston for drinks and bar snacks after watching the sold-out play "Betrayal," or have afternoon tea with a friend and the royal family from The Crown in the London home of film director, screenwriter, and producer Richard Curtis (known for popular films like "Love Actually," "Four Weddings and a Funeral," and "Notting Hill").

Or you could meet Gillian Anderson and watch her new play, "All About Eve," have breakfast with a friend and Louis Tomlinson at his favorite London cafe, or enjoy a Mumford & Sons concert put on for you and a friend in Richard Curtis’s home.

Prize drawings close in 53 days, giving you through April 14 to apply. Applicants can enter online, with entries starting at 10 British Pounds (about $13), or for free by post. The money collected from entries goes towards assisting charities in the U.K.

Transportation and accommodation costs will not be covered. 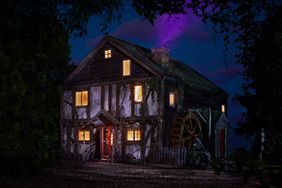