There's no shortage of cool things to do in New York City, from visiting historic sites to trying some of the best food in the world to filling your camera with amazing photos of the city's magnificent skyline.

Unfortunately, a lot of the best things to do in the Big Apple also happen to cost a big chunk of change. Heading to the top of the Empire State Building, for example, will produce amazing views of the city, but it will also cost a pretty penny. Meanwhile, a visit to Times Square to enjoy a Broadway show may be on most visitors' lists, but tickets for the most popular plays aren't exactly cheap.

The Staten Island Ferry is a great way to get close to the Statue of Liberty without the pricey ticket, making it one of the best free things to do in NYC. Grab a good viewing spot and take in the skyline from the water as the boat heads away from Battery Park. If you choose to hop off the ferry and explore Staten Island, Snug Harbor — once a refuge for retired sailors, now a cultural center and botanical garden celebrating New York's seafaring history — is a bit of a trek (40 minutes on foot or 15 minutes by bus) but worth a visit.

Relax in the sand at the city's public beaches.

You don't need to go all the way to the Hamptons to find a good beach near the city. Head to Coney Island to combine the beach with a trip to the amusement park (the Coney Island Cyclone has been around since 1927). Or, travel further down to Brighton Beach, where you can also find some great Russian restaurants. Hop on the ferry for the cost of a MetroCard ticket and make your way to Rockaway Beach, where you can combine a day of sand and surf with good food (like fish tacos from the Rockaway Beach Surf Club).

There are about 210 different species of birds found in Central Park, according to the Central Park Conservancy, with many paying a visit to the Big Apple to rest and feed during their spring and fall migrations along the Atlantic Flyway. Bird-watching novices can find tips and a map of the best viewing points around the park in the conservancy's Birding Guide.

Pay your respects at the 9/11 Memorial.

The 9/11 Memorial is made up of two reflecting pools, each marking the footprints where the Twin Towers once stood. It honors the lives lost during the terrorist attacks on the site in 1993 and 2001. The names of every person who died in those attacks are inscribed onto the edge of the memorial pools. The memorial is always free to visit, and the museum is free on Mondays from 3:30 p.m. to 5 p.m.

Walk across the Brooklyn Bridge.

The Brooklyn Bridge is one of the most iconic attractions in New York City, and walking across it is one of the best ways to take it all in. When the bridge was finished in 1883, it was the longest suspension bridge in the world. Now, the Brooklyn Bridge has been designated a National Historic Landmark by the National Park Service, and it happens to be one of the best places to view the downtown skyline. Pro tip: Go early, as the bridge tends to get very crowded during the day.

There is so much history to discover in the city, and a walking tour is one of the best ways to see it up close and personal. Sandemans New Europe offers free two-and-a-half-hour tours of downtown Manhattan, covering some of the most historic sites in the city, including the Charging Bull, Wall Street, and the 9/11 Memorial. While the tours are technically free, they do encourage tips for the guides, so bring some cash.

Let the kids loose in one of the city's inventive playgrounds.

New York City has no shortage of playgrounds for kids to burn off some energy, but some are simply cooler than others. At Ancient Playground, next to the Metropolitan Museum of Art, kids can explore pyramid-shaped climbers and check out the obelisk and sundial, both inspired by the Met's collection of Egyptian art. The Imagination Playground at Burling Slip, designed by architect David Rockwell, encourages kids to use their imagination with giant foam blocks, fabric, and crates. Pier 6 in Brooklyn Bridge Park features playgrounds like the Sandbox Village, where kids can play in little wooden houses in the sand, and the Water Lab, guaranteed to leave them soaking wet and cool on hot summer days.

Hang with farm animals at the Queens County Farm Museum.

Find cows, sheep, pigs, and more at the Queens County Farm Museum, which dates back to 1697 and is one of the longest continuously farmed site in New York state. Spread out over 47 acres, the museum is free to enter (except on certain event days), and it allows people to learn all about what the area was like before a bustling city sprang up around it.

See Shakespeare in the Park.

You don't have to fork over a ton of money to see a great theater performance. Each year, the Public Theater hosts free Shakespeare in the Park, a summer series at the open-air Delacorte Theater in Central Park. The series draws celebrity names and offers the chance to score free tickets for each day's performance through an in-person distribution, an in-person standby line in Central Park, and both digital and in-person lotteries.

At Ample Hills' interactive ice cream museum, located in its 15,000-square-foot Red Hook factory, you can watch ice cream being made and even make flavor suggestions on the creamery's "every flavor tells a story" board. If you get hungry after (and we'd be shocked if you didn't), try The Hook, a flavor unique to the factory made of burnt sugar ice cream mixed with salty fudge bites and Dutch stroopwafels (waffle cookies filled with caramel).

Learn the art of making beer during one of Brooklyn Brewery's free tours, offered every hour from 1 p.m. to 6 p.m. on Sundays. While you wait, you can sample the beers in the Williamsburg tasting room.

Get out on the water and try your hand at kayaking from Brooklyn Bridge Park any Wednesday, Thursday, or Saturday during the summer. Even kayaking novices can join in the fun; the Brooklyn Bridge Park Boathouse will teach you all you need to know before you get out on the water. You can paddle around its protected embayment for 20 minutes. Note, though, that reservations are required.

Take a tour of the New York Public Library.

The New York Public Library's Stephen A. Schwarzman Building in Manhattan has a storied past, touching on some of the most important moments in world history. During World War II, allied military intelligence used the library's Map Division for research, and the library collected materials "from the left and the right" during the McCarthyism era, despite objections. "Sex and the City" fans may remember it as the setting where Carrie wanted to marry Big. Now, you can visit the iconic institution with a free one-hour tour.

Opened in 2021, Little Island is a public park on stilts set on the Hudson River. With concrete "tulips" resembling oversized golf tees propping it up, the park merges art with outdoor recreation. On it, you can stroll its 2.4 acres via pathways that ascend artificial hills and wind through curated gardens. In the summer you're likely to run across live music, comedy, or theater on the island. The (fully accessible) floating urban oasis, located at Pier 55, is open daily from 6 a.m. to 9 p.m. or later, depending on the season. While shows held at the amphitheater require tickets, entry onto Little Island is always free.

Step back in time at Hamilton Grange National Memorial, which features the preserved historic home of Alexander Hamilton. It was completed in 1802, and Hamilton lived there for two years before he was fatally wounded in a duel with his rival, then-vice president Aaron Burr. You can see "the room where it happens" on a 25-minute, self-guided tour, but access to the interior is only free with walk-up tickets that don't guarantee you a spot. Otherwise, you can pay a $1 processing fee and reserve your place online through the NPS booking system, Recreation.gov.

Channel your inner flower child at the Brooklyn Botanic Garden.

Spend your morning surrounded by roses and water lilies at the Brooklyn Botanic Garden, a quiet escape from the hustle and bustle of the city. Located on the northeastern edge of Prospect Park, the garden sits on 52 acres of land. Admission is pay-as-you-wish on weekdays December through February.

The famous High Line, an elevated freight line-turned-popular park, is always free to visit, but you can learn more about the space and its history, design, and landscape on a free, docent-led tour. Tour dates and times vary by season.

Take a fun (and educational) trip to the Brooklyn Children's Museum.

If you have kids between the ages of six months and 10 years old, head to the Brooklyn Children's Museum for an afternoon of hands-on educational and engaging exhibits. The museum is free to visit on Thursdays from 2 p.m. to 5 p.m., thanks to its partnership with Amazon.

Step inside one of the world's most beautiful libraries.

The Morgan Library & Museum is home to J.P. Morgan's beautiful private library-turned-museum, a must-visit space for bibliophiles (in addition to the obvious must-visit New York Public Library). It's free to visit on Fridays between 5 p.m. and 7 p.m., but reservations are required. Tickets are available one week in advance.

Watch a movie in Bryant Park.

Rounding out this list of free things to do in NYC is a seasonal favorite. During the summer, lay down a blanket and bring some popcorn and candy (or buy some beer and wine) and settle in for an open-air movie in Bryant Park. Arrive early, as it gets crowded — the lawn opens at 5 p.m. for blankets and picnicking, and the movie starts at 8 p.m. 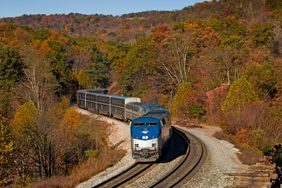 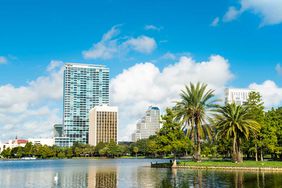 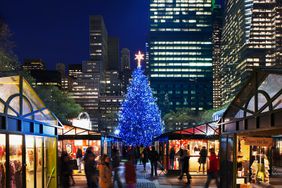