My family had settled in for dinner at the Four Seasons — we were overlooking the water, watching ferry boats pass, and sipping champagne to celebrate our first night in Seattle. As the food arrived, the server set a beautiful bowl of buttered pasta in front of my 2-year-old nephew. My sister promptly grabbed it, moving it out of reach in fear that he would shatter it. Then, she realized it wasn’t ceramic at all, it was plastic.

While on the surface the Four Seasons may not seem like the most kid-friendly place, like the rest of the city, it welcomes families with open arms.

Seattle sits along the Puget Sound, a mix of urban hustle and quaint, quiet neighborhoods all set on a hilly landscape overlooking the water below. The city experienced a population boom from the gold rush in the late 1890s, which then spurred development that is still integral to the city today, like Pike Place Market.

And while the city may be known for airplanes (it’s home to Boeing), wineries, and coffee (Starbucks hails from here, after all), it’s also incredibly family-friendly and goes out of its way to welcome kids at nearly every turn.

There are many aspects of the city that are perfect for kids and adults alike — here are our favorites:

The Museum of Flight

Boeing first started making airplanes in a small red barn in 1916. Today, you can visit that barn (it’s been moved from its original location) as part of The Museum of Flight.

We visited this sprawling museum just south of the city and found ourselves in awe of the over 175 aircrafts and spacecrafts on display, many of which you can walk right through. My nephew, who is into planes himself, marveled at the couches inside Air Force One (this particular plane remained in the presidential fleet until 1996) and played with the controls inside the cockpit of a fighter jet. Later, he pretended to check us in for a flight at one of the kids’ play areas which was set up like a ticket counter (complete with baggage carousel) and security line. We planned to spend an hour at the museum, and ended up being there for nearly three.

And as we flew home to New York a few days later, he clutched the toy Boeing 747 airplane we got at the museum, a reminder of Seattle’s airborne history.

No visit to Seattle is complete without a stop at the Pike Place Market. The iconic market is home to more than 200 small businesses nestled in a nine-acre historic district. A visit to Pike Place Market is an assault on your senses in the best way, and the perfect place for kids to sample new foods.

The market started in 1907 after the price of onions got out of control (farmers used to sell their goods to wholesalers who then resold them, often without much profit for the farmers). When the market first opened, the first farmer sold out of produce within minutes and in the course of a week 70 wagons gathered to sell their goods.

Today, you can see fish being tossed through the air, taste cheesy biscuits, and indulge in Beecher’s creamy mac and cheese. The Early Access VIP Food Tour from Savor Seattle combines history with bites of smoked salmon and cinnamon orange tea from Market Spice (first opened in 1911) and a fish-throwing lesson.

We shared these small tastes with my nephew, watching him take small bites of a maple-bacon mini-doughnut, content with the sugar rush.

Open in 1962 for the space age-themed world’s fair and standing at 605 feet, the Space Needle represents one of the most quintessential and recognizable parts of the Seattle skyline. About 1.3 million people visit each year, taking the 43-second ride up to the observation deck and looking down from the large, slanted glass panes and rotating glass floor at the city below.

My nephew couldn’t believe his luck when he stood on the glass bench and put his hands on the angled windows — appearing to hang out over the skyline. He loved the revolving glass floor so much, we had to practically drag him off of it when it was time to go.

When you board the Monorail, you’re immediately struck by the picture windows — so big they feel as if you’re practically outside. And as you zoom through the city from downtown Seattle to the Space Needle, you can imagine a future of flying cars and hyperspeed transportation. After all, a vision for the future was the spirit behind the Monorail when it was built for the 1962 world’s fair.

The big windows and towering view from above (not to mention how it tilts as you round the corner toward the Space Needle) make it the perfect quick, and relatively inexpensive, adventure for kids of all ages.

Seattle is one of the most child-friendly cities I’ve been to, with many restaurants having kid-specific menus. At Cafe Flora, offerings like pita pizza (pizza happens to be my nephew’s favorite food) catered to kids’ taste buds and a play area with books, toys, and crayons entertained him as we waited for our food. Cafe Flora’s portobello-mushroom French dip sandwich with a rich mushroom garlic au jus and the spring onion risotto provided more sophisticated, adult-friendly options.

For dessert, head to Shug's Soda Fountain & Ice Cream for an old-fashioned ice cream parlor experience. Here, ice cream cones come piled high with rainbow sprinkles and thick hot fudge spills over the edge of the dish. While no kid — or adult — would turn down this kind of sugar high, the small-batch ice cream from Lopez Island Creamery and house-made syrups will ensure kids learn what quality tastes like.

Many hotels offer items like cribs to make a traveling parent’s life easier, and Seattle is no different. But the elegant (and not stuffy) Four Seasons Hotel Seattle went the extra mile — and then some. With a veritable toy store behind the front desk, they kept pulling out little gifts to give to my nephew, like a small stuffed shark that he insisted on carrying around with him and a pair of green, kid-sized sunglasses that matched the green shorts he was wearing.

After his bath, we wrapped him up in the teeny-tiny robe that was provided and a pair of tiny slippers he wouldn’t relinquish after he figured out how to put them on and take them off himself.

Between the plastic, ceramic-looking bowl from our first dinner (plus the child-friendly, Lego-themed cutlery), the staff who fawned over him, the diaper genie that was left in the room, and the small stuffed wolf left in his crib, we felt like he was as welcome as any adult guest — and maybe even more.

Much of Seattle’s history is rooted in the gold rush as the city was the jumping off point for many prospectors who flocked to try their luck at finding the valuable precious metal.

For kids, hands-on learning is always a great — and super fun — way to experience history. At this National Historical Park — which is totally free — kids can take part in a gold panning demonstration, step on the scale to learn what their weight in gold is worth, or take a spin on the “Strike It Rich” wheel to find out if they “struck gold” so to speak (since only about 300 of the 100,000 people who embarked for the Klondike made more than $15,000 — the equivalent of about $330,000 in 2005). 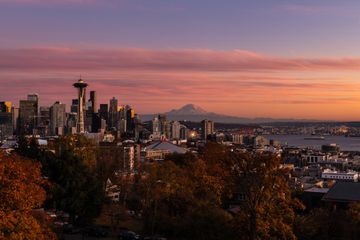 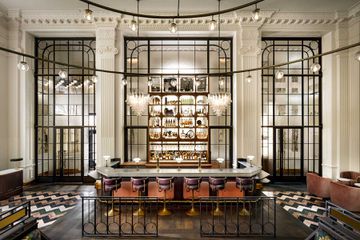