It highlights the best of the East Coast.

The train is an underutilized and underappreciated form of transportation — I learned this when I traversed the West Coast from Los Angeles to Seattle on Amtrak’s scenic Coast Starlight route one summer. The route covers the best of the Pacific Coast Highway and lets you navigate one of America’s most treasured routes without the hassle of a car, yet few are aware of it.

Perpetuating our nation’s ongoing rivalry between its left and right boundaries, the Eastern Seaboard is not to be outdone: Amtrak’s Silver Service/Palmetto route stretches between Miami and New York City, highlighting the best of the East Coast — Savannah, Charleston, Washington, D.C., and more — along the way. Exploring the full spectrum of American culture and character from New York down to sizzling Miami in a way that’s convenient, comfortable, and picturesque is a travel hack reserved only for the savviest trip planners.

The Silver Service/Palmetto route is comprised of three different trains: the Silver Meteor, the Silver Star, and the Palmetto. It departs daily — both north and southbound — and serves 55 stations, including cities like West Palm Beach, Tampa, Orlando, Raleigh, Richmond, Baltimore, and Philadelphia. The journey takes around 28 hours, if you were to go end to end without disembarking, but the beauty of traveling by train is the freedom it offers to break up the trip and spend a day or two in desired points of interest along the way, or to stretch the journey out over weeks.

It’s a great route for families, couples, solo travelers, and anyone in between: The Silver Service/Palmetto route snakes through some of the best places to visit in Florida as well as East Coast capitals and historic hot spots with significance dating to our nation’s nascence. You can combine a beach trip to Florida with a culinary tour of the South, then add on an educational trek through the mid-Atlantic and Northeast before arriving among the bright lights of the Big Apple.

On our East Coast adventure, my husband and I opted for a Viewliner Roomette for the first 10-hour leg of our journey from our home in West Palm Beach to Savannah, Georgia (we skipped the Florida stops on this trip since we’ve explored the state widely). Knowing we’d spend most of the day on the train, we wanted a place we could stretch our legs, nap, and work and read in privacy. We were surprised to find our own built-in bathroom — a sink and toilet that converts into an additional seat thanks to a sturdy cover — and the ability to transform our space into a double-seater or bunk beds, depending on our preference.

We didn’t spend the night on the train due to the way we broke up our trip, but you certainly could: There are showers nearby, and hot meals like chicken fettuccine, creole shrimp and andouille, and red wine braised beef are included in the dining car. The roomette also comes equipped with fresh towels and linens, individual reading lights, an electrical outlet, a garment rack, a fold-down table, and turndown service. Alternatively, there are bedrooms, bedroom suites, and both coach and business class seats available on the Silver Service/Palmetto route.

Upon arriving in Savannah, the eclectic-luxe Perry Lane Hotel was a warm welcome to one of the most charming cities of the South, and must-hit stops like The Olde Pink House, Leopold’s Ice Cream, Forsyth Park, Broughton Street, and the Riverwalk were within easy walking distance.

We spent our days enjoying the Spanish moss-draped sights and soaking in history at the American Prohibition Museum (they like to say it’s “not your typical dry museum” since there’s a speakeasy at the end) and the Owens-Thomas House & Slave Quarters. At night, we got spooked on ghost tours like Genteel & Bard’s two-hour Dark History & Ghost Encounter Tour (ghost tours are a non-negotiable in Savannah).

Other nighttime favorites were The Grey, a restaurant in a renovated Greyhound bus depot, and underground Alley Cat Lounge for drinks.

From Savannah, it’s a quick hour and a half to Charleston, where a free shuttle serves the historic peninsula area, connecting you not only to buzzing King Street, but also to attractions like Rainbow Row, Waterfront Park, Broad Street, City Market, and more. The Restoration, a boutique hotel just off of King Street, provided a cozy and stylishly urban stay, showcasing the best of modern Southern hospitality.

Deciding where to dine in a foodie city like Charleston is no easy task, but we were happy with our picks: The Darling Oyster Bar and 5Church, which is housed in a former chapel and still sports the original steepled ceiling and stained glass.

In Charleston, we also opted for a beach getaway at Wild Dunes Resort on nearby Isle of Palms — the barrier island’s laid-back Sea Biscuit Cafe is worth the detour, overnight stay or not.

After a couple of gluttonous days in the Holy City, we made the nine-hour trek north to Alexandria, a hidden gem of the D.C. region and one of the sweetest small cities in the country (oh, and George Washington’s hometown).

Stay in historic Old Town Alexandria — Hotel Indigo Old Town Alexandria is a fresh and well-located option — to enjoy easy access to the district’s 200 independent restaurants and boutiques plus photo-worthy spots like the Spite House, George Washington’s townhouse, and Captain’s Row. Founded in 1749, Old Town continues to buzz with an of-the-moment verve, thanks to new developments, well-preserved monuments and museums, and renovations along the waterfront.

Most of Alexandria’s action is concentrated along mile-long King Street, recognized as one of the “Great Streets” of America. Plus, a free King Street Trolley runs east-west along the street from just outside the Amtrak station to the waterfront, where you can see the D.C. skyline across the Potomac.

Trendy spots like The People’s Drug, Virtue Feed & Grain, and Captain Gregory’s — a 25-seat speakeasy inside a donut shop — showcase the best of Alexandria today, but hit spots like the Stabler-Leadbeater Apothecary Museum for a taste of the city’s centuries of history, too.

Hopping from Alexandria over to Washington, D.C. takes about 15 minutes, and you can do it by train or by metro. If you arrive in D.C. on a weekday, pop in to Charlie Palmer Steak — it’s the city’s go-to power-lunch spot and comes with a near guarantee of “celebrity” sightings (over the course of one meal, I noticed I was sitting near Jeff Sessions before quickly becoming distracted when Tim Cook strolled by).

Other than gawking at power players and world leaders, there’s a lot to do in D.C. and it can be hard to figure out where to start. Touristy as they are, double-decker Big Bus Tours are a great way to get the lay of the land. They let you check off days worth of sightseeing in a matter of hours — and in a place like D.C., you’ll wear yourself out trying to fit in the White House, Capitol Building, National Mall, Washington Monument, Jefferson Memorial, Lincoln Memorial, and the many other must-see monuments and historic highlights.

When it’s time to hit the hay, check into digs like the Moxy Washington, D.C. Downtown for a hip and lively place to lay your head (or party all night, since the check-in desk doubles as a bar). For a more refined option, the JW Marriott Washington, D.C. is around the corner from both the White House and Old Ebbitt Grill, placing two D.C. highlights at your doorstep.

Brains filled with American history and patriotic pride, we headed approximately three hours from D.C. to New York City to round out our grand tour of the East Coast.

New York is another city where you’ll want to arrive armed with Big Bus tickets and a CityPass, which grants admission to can’t-miss attractions like the Empire State Building, Top of the Rock observation deck, 9/11 Memorial, the Met, and more. It also includes ferry access to the Statue of Liberty or a trip on a Circle Line sightseeing cruise.

There’s no shortage of hotels in the city, and it’s difficult to narrow down the options, so we picked four: The Jane Hotel, a West Village charmer that felt a bit like being on set of a Wes Anderson movie; the Renaissance New York Times Square, perched smack dab in the middle of Times Square with an unbeatable location and views; the New York Marriott at the Brooklyn Bridge for a taste of Brooklyn; and The Ludlow for a peek into cutting-edge New York cool.

Planning a trip to New York City is a daunting task, and it’s impossible to see everything in one go — you can visit Times Square, Central Park, Rockefeller Center, Broadway, and all five boroughs and still not even scratch the surface. However, online resources like NYC & Company offer useful tips, guides, and breakdowns to help you figure out the best items to include on your itinerary, no matter how long you have or what season you’re visiting. 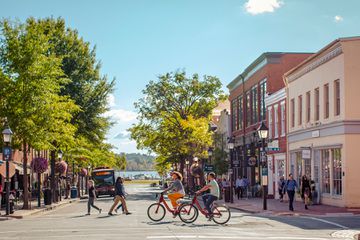 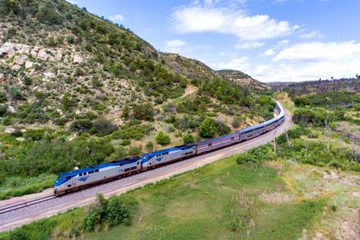 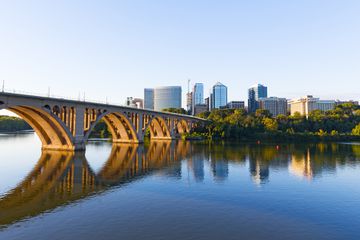 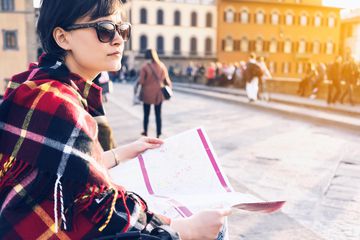 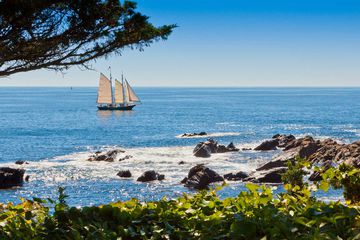