Grand Canyon Railway is offering steam engine train rides this summer — but only on select dates.

Once, long ago, thousands of steam engines roared their way across the U.S. Today, fewer than 200 survive, just a handful remain operational, and even less live on passenger railroads. That makes it all the more special that the Grand Canyon Railway is inviting travelers to come and experience this magical mode of transportation once more.

"The Grand Canyon Railway celebrates the history of rail travel with several steam-powered excursions to Grand Canyon National Park each year," the company explains on its website. It notes, it keeps two fully restored vintage steam locomotives — GCR No. 29 and GCR No. 4960 — in service to pull The Train on select dates throughout the year.

In January, Grand Canyon Railway announced that it will once again run the big steam engine, No. 4960. As the railway explained, No. 4960 was built in 1923 by the Baldwin Locomotive Works in Philadelphia, Pennsylvania, with the purpose of hauling iron ore and other freight throughout the American Midwest.

The engine was retired from freight service in 1960, but continued to pull excursion, museum, and circus trains throughout Wisconsin and other Midwestern states until the early 1970s. The engine was then purchased by the Grand Canyon Railway in 1989 and underwent what the railway calls "one of the most extensive locomotive rebuilding and restoration projects in modern history," when it was converted into a diesel engine in the mid-90s. Finally, in 2009, it was converted once again — this time to run on recycled waste vegetable oil to make for a nearly carbon-neutral ride. It's now lovingly referred to as "The Green Machine."

The trips will take place on the first Saturday of each month from March through October, as well as on Feb. 21 (President's Day), April 22 (Earth Day), and Sept. 17 (the anniversary of the Grand Canyon Railway). The trips are scheduled to pull the 9:30 a.m. departures. The steam journey takes visitors on a two-hour trip each way and allows for a three-and-a-half-hour visit to the Grand Canyon National Park in the middle. 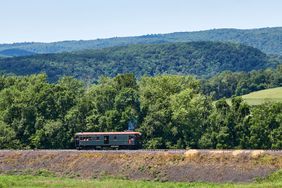 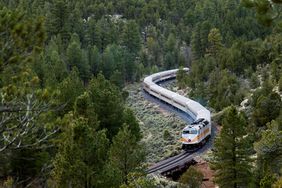