From walled hilltop destinations to boho beach spots, here are 12 of the best small towns in Italy.

Julia Buckley
Julia Buckley is a journalist who’s been writing about Italy for more than 15 years. Born in the U.K. and inexplicably drawn to Italy from childhood, she discovered her hidden Italian heritage by chance while studying at Oxford University.
Travel + Leisure Editorial Guidelines
Fact checked by
Jillian Dara

That Italy has some of the finest cities in Europe, you already know. Florence and Rome remain two of the best international destinations for gorgeous sights and delicious plates of pasta. But, sometimes you want to sip an Aperol spritz on a secluded beach away from the crowds. To see Italy as the locals do, and escape your fellow tourists, you might consider one of the European country’s picturesque smaller towns.

Stroll down narrow Medieval streets or dine seaside in these quiet Italian hamlets. The 12 towns here enjoy everything that Italy is good at — incredible history, culinary delights, and beautiful countryside views — but on a smaller scale, with populations under 10,000. While the majority of visitors will flock to the major cities, here's how you can find a more intimate kind of dolce vita in storybook locations.

This hilltop Tuscan town on the border of Umbria is overshadowed by the region's showstopper destinations — in fact, it's best known for the 1440 battle between Florence and Milan that took place on the plain beneath the town. Despite being lesser-known, however, Anghiari is up there with Italy's loveliest destinations: a walled town high on a bluff, with pedestrianized alleyways roller coastering up and down the hillside, and crammed with grand palazzi and art-filled churches.

Walk the city walls for spectacular views toward Umbria and the Apennine Mountains, learn more about the battle at the brilliant Museo della Battaglia e di Anghiari, which has regular exhibitions in conjunction with Florence's Uffizi Galleries, and swim in the Tiber — yes, Rome's river, which is just a mountain stream here. Stay outside town at Agriturismo Terra di Michelangelo, located in the hills with sweeping views and an excellent restaurant.

The "Queen of the Dolomites," Cortina is a chichi ski resort — it has even been chosen as the location for the 2026 Winter Olympics. But Cortina is just as lovely off the slopes, thanks to the Regole — a collective of the descendants of the valley's earliest inhabitants, who are part of the local Ladin ethnic group. They've worked hard to stop Cortina from being overbuilt, meaning its small town center has stayed largely unspoiled compared to other resorts. Stay at the luxurious Cristallo, A Luxury Collection Resort & Spa for gorgeous views and fine dining. For an even more extensive taste of the local cuisine, visit the hills outside town for El Brite de Larieto, a working farm with a superb restaurant (the same family owns the Michelin-starred SanBrite).

Calabria is famously the toe of Italy's boot, and on the knobbly bit of the toe, you'll find the Capo Vaticano peninsula. Tropea, one of the best seaside locations in the Mediterranean, sits right at the edge, where the cliffs plunge vertically into the sea and the volcano island of Stromboli belches smoke offshore in the distance. Tropea itself is a beautiful mix of palazzo-filled alleyways coming to an abrupt stop at the cliff face, where there's a pretty crescent of sand at the bottom. This quiet locale is mostly visited by Italian tourists in the know, so you'll really get to immerse yourself in the local culture. Book a room in Villa Paola, a former 16th-century convent that’s been converted into an adults-only, five-star hotel. Don't leave without trying Tropea's famous red onion, so popular it even comes in the gelato.

Already a thriving town when Rome was just a minor settlement, Norcia, in the Umbrian mountains, has long been a place of pilgrimage — both for religion (St. Benedict, who founded the Benedictine order of monks, was born here) and for food. So famous are the butchers here that norcineria has become the word used all over Italy for a type of deli, and prosciutto di Norcia is up there with Parma ham for its quality.

The town was devastated by an earthquake in 2016, but Norcia is holding on — and while many historic buildings, including the churches, are still rubble, the town's superb restaurants and food shops continue to operate. Many are in temporary buildings on the outskirts of town, but the new surroundings haven't affected the quality — this is still one of Italy's best foodie destinations, especially if you like truffles as this is Italy's Black Truffle capital. Cantina 48 is a top option, and for accommodations, stay at luxe retreat Palazzo Seneca, which also has its own Michelin-starred restaurant.

Seen from the air, Palmanova is a gem — literally. Its striking star-shaped walls were built by its Venetian rulers in 1593, and they've been preserved so well that they're part of a UNESCO World Heritage network of Venetian defenses. Meanwhile, the elegant town itself — shaped like a finely cut gemstone — radiates out in neat wedges from the hexagonal main square. Take a guided tour for a chance to step back in time and taste 15th-century Venetian cuisine. While its historical significance is reason enough to visit, the yearly reenactment of the start of the 1615 Ottoman—Habsburg wars is also a must-see.

Thought the Amalfi Coast was Italy's prettiest seaside road trip? Prepare to be blown away by Sardinia's west coast, where the road swerves around cliffs, wiggles across bridges, and switchbacks through towns and villages spilling down the cliffside. Bosa — on lower ground, astride the Temo river where it reaches the sea — is one of the prettiest. Its houses are painted in Instagram-friendly pastels and the town is watched over by an ancient castle. Following the river just outside of town, you'll find Bosa Marina, one of Sardinia's most popular beaches. Villa Asfodeli is a lovely albergo diffuso (scattered hotel), located in Tresnuraghes, a 10-minute walk away.

In the summer, people flock here for the nearly two-mile beach, splayed out at the foot of the town. But sunny San Vito — dangling into the Mediterranean on Sicily's northwestern tip — offers year-round charm. It punches above its weight culturally, with the Siciliambiente Film Festival, a fall climbing festival (in the mountains rearing up behind town which are a famous climbing destination), and the annual Cous Cous Fest in September, which brings chefs from all over the Mediterranean to share their traditional couscous recipes. It's perfectly placed for outdoorsy vacations, with two nature reserves — Monte Cofano and Zingaro — nearby. Naturally, there are plenty of beachside hotels and B&Bs for your stay.

Central Italy is packed with fortified medieval hill towns, all enjoying jaw-dropping views over the local landscape. Treia is one of the loveliest, perched amid the undulating hills around Macerata in the Marche region. Where many equally pretty towns have been taken over by tourism, Treia remains fiercely local, with storefronts more likely to be taken up by football clubs than souvenir shops. Bite into a calcione, a local cheese-filled pastry specialty traditionally eaten around Easter. There’s also a popular historical reenactment that takes place in the summertime. The surrounding countryside is full of excellent agriturismo and B&Bs.

When Horace Walpole wrote his gothic horror novel, "The Castle of Otranto," he hadn't actually been there; if he had, perhaps the book would have been less of a screamfest. This beautiful fishing town spilling down the hillside on the Salento peninsula — the spike on Puglia's heel of the Italian boot — oozes dolce vita, from the restaurants serving freshly netted fish (we recommend Laltrobaffo) to the white-stoned palazzi lining the streets. There is a 15th-century castle, and the cathedral has one of the finest mosaic floors in Italy, with zodiac signs, the Tower of Babel, and even Alexander the Great on there, all done in the 12th century. Hotel Palazzo Papaleo provides charming accommodations, as well as a terrace restaurant and a spa.

As Italy's foodie capital, Emilia-Romagna is known for its pasta, prosciutto, and parmesan — but not necessarily its olive oil. Things are different in Brisighella where the hills, heading toward Tuscany, produce exceptional oil, bringing people from all over the region to its annual festival. In fact, the town, overlooked by an ancient castle, hosts several culinary events throughout the year like an artichoke festival in May and a truffle festival in November. Relais Varnello is a hotel nestled in the foothills with views of vineyards and olive groves.

Around 11 people live in Civita, once a thriving Renaissance town, later largely abandoned due to subsidence (this is Lazio's canyon country). Most locals now live in Bagnoregio, the town sitting across the canyon, while access to Civita itself — now just a nub of the original town, the rest having fallen into the abyss — is via a long, steep walkway.

That said, it's an Italian borgo (small town) at its best, with cobbled alleyways, flowerpots on the doorways, and gasp-inducing views of the badlands surrounding it. Despite its tiny population, Civita is home to an exceptional restaurant that wouldn't be out of place in Rome or Milan — Alma Civita, sculpted from the rock face by the pre-Roman Etruscan civilization.

The Cinque Terre towns are smaller than Porto Venere if you're going by population, but add in the tourists and you're at city numbers on the streets. Porto Venere — reached by a winding bus route across the mountains or a ferry — has all the sea views and cutesy alleyways of Cinque Terre, but it's not as busy, with more Italian than international visitors. Its seafront, which features brightly painted houses, is typical Genoese style, while the caruggi (alleys) behind it are filled with shops and bars. Stay at the Grand Hotel Portovenere — the former convent, current five-star boutique hotel that rises over Porto Venere and the marina. Can't skip Cinque Terre? Boats from here take you straight there. 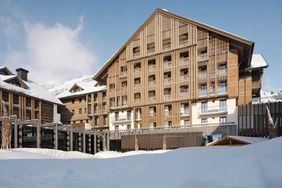