Live out your fairy-tale dreams in Germany.

Germany was once home to some 25,000 castles. Yes, you read that correctly, 25,000. However, according to the History of Yesterday, who dug through the European Institute of Castles data, just 60% of those castles remain either in all their glory or in ruin, meaning just about 15,000 can be found in the nation today. But as a fun fact, the website did add this tidbit: If that 25,000 number was once correct, that means, at one time, there was a German castle every 15 miles.

These were the homes of not just kings and queens but of knights and nobility stretching across hundreds of years, who each wanted to build a status symbol of their own. Think of it as their version of a planned development.

Thankfully, the owners built many of these magnificent homes to last so we can still enjoy them while visiting Germany on vacation today.

Indeed, the castles remain some of the most popular German attractions, drawing visitors from across the globe to their treasure-filled armories and enchanting grounds. Neuschwanstein Castle, in Bavaria, has the distinction of being one of the most-visited castles in the entire world, luring in more than 1.5 million tourists a year with its two-story throne room and ornately-furnished chambers.

Turrets and towers rise from all across the German countryside, crowning Alpine mountains and overlooking vast parklands, forests, and charming villages. You can find them just outside popular cities or floating on island lakes. German castles represent a vast range of architectural designs, including the medieval Burg Eltz Castle and the Renaissance ruins of Heidelberg Castle. What they all have in common, of course, is their vivid depiction of a moment in German history.

These castles remain important parts of German life. They now serve as government buildings, museums, landmarks, hotels, and — in more than a few cases — incredible private homes. Ready to see a few for yourself? Here are just a few of the German castles you need to add to your must-see list.

Eltz Castle has endured more than most, including several wars, with minor damage. In fact, it looks pretty much the same as it did in the 15th century, when it accommodated three noble families. Today, it's still under the ownership of one of the original households (the Eltz's), who have had it for 33 generations. And we're not the castle's only admirers: Back when Germany's national currency was the Deutsche Mark, its spires featured prominently on every 500-mark bill printed between 1961 and 1995.​

This former hunting chateau was originally commissioned as a "grander" version of Versailles. It served as a military hospital, boarding school, and refugee center before it was ultimately remodeled as a grand hotel in the year 2000. The hotel is now a member of Leading Hotels of the World. Its 120 rooms and suites are tastefully done with leather upholstery and wooden desks. The hotel also boasts views of the Rhine Valley and a 3-star Michelin restaurant, Vendome. All this is just 12 miles away from Cologne.

Nicknamed the Sleeping Beauty Castle, families love this ivy-covered, rose-filled estate for its fairy-tale looks (its actual address is on the Fairy Tale Route) as well as its offerings. The castle sits next to Tierpark, Europe's oldest wildlife park with 80 different species, including bison, wild horses, and penguins. The castle has also been undergoing extensive renovations since 2018. However, Reinhardswald Nature Park is working with the state of Hesse to allow guests to enter the castle courtyard and sun terrace to experience its magic. And, if you're lucky, you'll even see Sleeping Beauty and Prince stroll through the complex at selected times.

This Norman castle makes quite a first impression. Strategically hidden from view, travelers first approach through dense forest, when suddenly the branches and treetops give way to soaring stone ramparts and watchtower. Wartburg is one of the best-preserved medieval German fortresses, dating back almost 1,000 years. Martin Luther is said to have spent six weeks here translating the New Testament into German, and Wagner used it as a refuge while composing his famous Tannhauser opera.

Framed spectacularly against the Bavarian Alps (with Germany's highest peak, Zugspitze, just 30 miles away), Schloss Elmau is a pastoral gem, which hosted the international G7 summit in 2015. A major fire in 2005 meant that much of the original structure had to be rebuilt, but the premises have since been restored. Travelers — especially families — can plan an entire vacation here, as the site hosts two world-class spa hotels, complete with restaurants, yoga facilities, a hammam, outdoor pools, a concert hall, and guided nature excursions.

This Neo-Renaissance castle, built on an island inside Lake Schwerin, is completely surrounded by water, connected to the mainland by a single bridge. The first records of Schwerin date back to 793, when the site was used as a military fort, though the castle we see today wasn't built until 1857. Instead of Grand Dukes and Prussian officers, Schwerin Castle now houses the State Parliament, as well as a museum, porcelain collection, and concert venue.

Fronted by English and French-style gardens and neighboring the Saale river, Dornburg is a candy-colored fortress that contains not one but three distinct castles, each corresponding to a different epoch. Visitors can freely wander the Rococo and Renaissance castles, while the Old Castle (dating back to 1573) is available on special guided tours only. The famous German poet Goethe used to visit here, and there's even an exhibit devoted to his work.

Looking for an easy day trip from Frankfurt? This grand estate, and one-time royal palace, is a worthy contender. In the late 1800s, Empress Victoria (Queen Victoria of England's first child) decided to build a neo-Gothic castle for herself that combined German Renaissance and English Tudor styles. The result is impressive. Visitors today can browse the halls filled with antique paintings and tapestries. There is also a golf course, several restaurants, and a whiskey bar with live jazz.

Overlooking the Salzach River, Burghausen Castle is a hardwearing 11th-century citadel capped with lustrous red tile roofs. Don't let its beauty fool you. It was once the gruesome site of torture and executions (there's even a museum with various iron implements on display). At 3,422 feet, it's the longest castle in the world and features a magnificent collection of late Gothic panel paintings, along with a cycle illustrating the history of Bavaria.

This gravity-defying cliffside castle, which contains two immense banquet halls and an artificial indoor cave, was originally commissioned in the mid-1800s by King Ludwig II to represent the ideal (or, at least, his ideal) medieval fairy-tale castle. So swept up in his own fantasy, Ludwig hired a theatrical set designer — rather than an architect — to design it. The result is an unmistakably grand silhouette that shines like a crown amid the somber Bavarian Alps. Not that we'd expect anything less from a man once quoted as saying: "I want to remain an eternal mystery to myself and others."

Lichtenstein Castle, first built in the 14th century, was left to ruin and would have stayed that way if owner Count Wilhelm hadn't seized the opportunity to have the entire medieval structure rebuilt in 1842. Inspired after reading the novel Lichtenstein, the Count based his design around the original castle walls, which rest on a plummeting cliff edge. Inside, visitors can browse original paintings, stained glass, and military armor from medieval times.

One of Germany's most-visited castles, this neo-Gothic hilltop abode was rebuilt three times over the course of eight centuries. The current iteration, the work of late 19th-century King Frederick Williams IV of Prussia, contains a letter from George Washington, in which the former American president commends Baron von Steuben (a descendent of Hohenzollern) for his service in the American Revolutionary War. 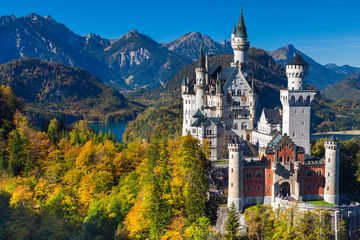 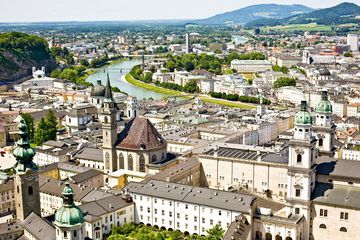 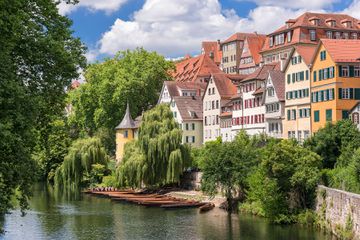 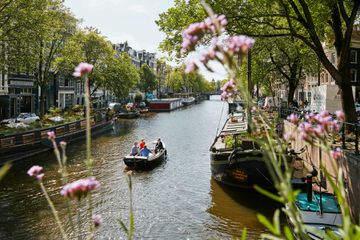