7 of the World's Most Beautiful Red-sand Beaches

Typically, beaches come in white, gold, and shades of brown. But travelers seeking more unusual shorelines can find sands in a range of hues, including blushing pink, glittering olivine, and even dark red.

Red sand typically indicates that there is a significant quantity of iron nearby, either in the earth or deposited over years of volcanic activity. Some red beaches (like Kokkini Beach in Greece) are even flanked by dramatic carmine cliffs.

Visiting one of these seven gorgeous red-sand beaches — which are found in diverse destinations ranging from Hawaii to Italy, and even eastern Canada — is like traveling to a Martian landscape.

At Ka'uiki Head, on the island of Maui, there is an isolated and remote stretch of sand known as Kaihalulu Beach. Though finding your way here is a serious journey, the sight of some of the world's reddest sand is a breathtaking reward. High iron content in the surrounding area has led to the deep crimson hue of Kaihalulu Beach. But it also means the sands are rough, and appropriate footwear is a must.

Thanks to iron-rich soils, there are some 500 miles of reddish coastline on the Canadian province of Prince Edward Island. Cavendish Beach is just one of them, and even its surrounding cliffs are a brilliant dark vermilion. This colorful stretch of coast is part of Prince Edward Island National Park, which contains both red- and white-sand beaches. An added plus? The famed Anne of Green Gables house is nearby.

Two hours south of Lisbon is Porto Covo, a small and sleepy whitewashed fishing village in Portugal's Alentejo region. The sand at Porto Covo's main beach is red with a charred-orange tint that becomes even more vibrant when the sun sets over the Atlantic. If you come here, book a room at Cabeça da Cabra Casa De Campo, a former schoolhouse-turned-chic surf shack B&B.

At Kokkini Beach on Santorini, nearly vertical volcanic cliffs seem to plunge directly into the Mediterranean — and their vibrant hue is heightened when contrasted with its turquoise waters. Kokkini Beach can be reached either by boat or a short (albeit steep) walk. Buses depart for this area daily from Fira, Santorini's capital.

Ramla Bay lies on the northern coast of Gozo (one of Malta's 21 islands), and its beachfront is colored a burnt, orange-red — a particularly striking tone set against the electric-blue sea. Because it's nestled at the bottom of a valley, Ramla I-Hamra beach is a sanctuary for wildlife and vegetation. However, it is one of the more touristy spots to lay down your beach towel on this island.

Though more orange than red, Porto Ferro, on the western coast of Sardinia, is a beguiling sight. Ferro means "iron" in Italian, a nod to the mineral that creates its striking color. Abundant iron particles in the sands of Porto Ferro mix with limestone, bright coral pieces, and volcanic residue to give this beach an especially unusual appearance.

The Galápagos archipelago is a famously remote destination known for its incredible endemic animal species and striking landscapes, and the totally off-grid, unpopulated (by people) island of Rabida is no different. Its shores are lined with large, red volcanic pebbles, as well as fragrant palo santo trees and numerous lagoons. Visitors travel by boat and arrive by wet landing to Rabida Island's one and only visitor site. 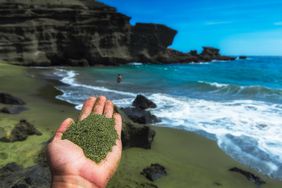 These Are the Only Green-sand Beaches in the World 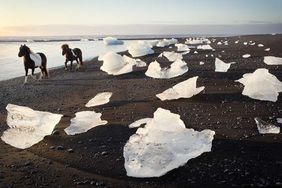 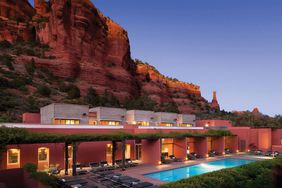