The Athens Riviera Is Returning to a World-renowned Beachfront Destination

Welcome to The Hamptons of Athens.

Vacationing on the European Riviera never goes out of style. From the seaside enclaves on the Amalfi Coast to Nice and Cannes, travelers from all over the world flock to the southern Italian and French coasts in the summer. Slightly to the east of the Mediterranean and Tyrrhenian Sea is another riviera that is 50 years in the making: the Athens Riviera.

While the Grecian islands — Mykonos, Santorini, and the like — appeal to travelers looking for coastal glamour, the Athens Riviera has a similar (if less publicized) draw. Athens, thought of as a two-day stopover en route to the islands, has often been pigeonholed as a quick trip that checks a box on your travel list. It offers history and Acropolis tours, rather than the beaches of Milos and Ios and the nightlife of Mykonos and Santorini.

But over the last 50 years, Astir has changed the way we think about vacationing in mainland Greece. Set on a peninsula just outside of Athens, Astir comprises the city center and main beach area within Vouliagmeni, which essentially became The Hamptons of Athens in the '60s. Geographically, Vouliagmeni even looks like Montauk, jutting out onto a thin, beach-lined strip, a short drive from the main city.

Development on the area started in 1954 — and by August 1960, Astir Palace debuted as a luxury resort with 150 rooms, cabanas, and beach culture in full swing. The palace, designed by acclaimed Greek architect Kosta Voutsinas, exuded the riviera elegance coastal Athens had hoped to emulate. And thus, the Athens Riviera was born, surging as a luxury destination, coincidentally, at the same time Positano flourished as an Amalfi Coast hotspot.

The early heyday of Astir Palace saw Jackie Onassis vacation on the Athens Riviera. The area welcomed the likes of Brigitte Bardot, Frank Sinatra, John Wayne, and even Richard Nixon. Of course, the scene needed to expand. The '60s had only just started to make the Athens Riviera happen. And that meant continuing to build on the peninsula beyond Astir Palace.

Next came The Arion in the early '70s — it was a hotel with a spa, where every room had a seaview, and the design featured exceptional 20th-century accents. The lavish design was executed by three Greek architects who curated every piece in the hotel, down to the very last towel ring, to preserve the high-class décor. In 1979, the next major build was completed: The Nafsika opened on the northern side of the peninsula. The 330-room hotel had a stately presence to begin with, but the gravitas of the space increased with the addition of a new façade a few years later. By the '80s, the framework of the Athens Riviera was set in literal stone — thanks to these now-iconic buildings on the peninsula.

As the infrastructure solidified in Astir, the arts and culture scene grew simultaneously. The '80s and '90s artwork took the Athens Riviera to new cultural heights. Art historian Dora Iliopoulou-Rogan brought in works from the National Bank of Greece's private collection. Iliopoulou-Rogan built up Astir's artistic clout by commissioning pieces from both famed Greek artists and up-and-comers.

Flash forward to 2019. It's been about 50 years since the Athens Riviera first came on the scene. And in March of that year, the area welcomed the first Four Seasons property in Greece. Four Seasons Astir Palace Hotel united the three resorts of the '60s and '70s — Astir Palace, Arion, and Nafsika. And the global brand coming in to this small seaside enclave instantly gave credence to this riviera 50 years in the making. The Four Seasons' 303 rooms are spread across The Arion and The Nafsika — with the hotel revitalizing the stunning buildings erected nearly half a century ago. They've even brought back the riviera-chic bungalow accommodations, originally built in the '60s and nestled along one of the resort's three private beaches, as an homage to the original glitz and glamour of the riviera.

And so, a new era of the Athens Riviera was born, just in the last three years with the opening of Four Seasons Astir Palace. What started half a century ago has given way to a new dawn of Grecian luxury, building off the past and pushing the Athens Riviera into the future. 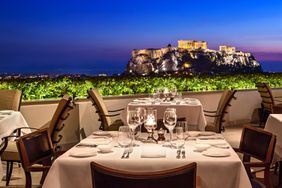