This 1,600-mile Cycling Route Takes You To Ireland's Most Beautiful Sites

Ireland’s Wild Atlantic Way, a 1,600 mile driving route, is gaining traction among bicycling enthusiasts. Here are the most scenic stretches for a memorable bike ride.

There are few road trips more epic than the Wild Atlantic Way, a 1,600-mile route along Ireland's western coast that stretches from County Cork to County Donegal. Each bend in the road offers the promise of something extraordinary: a magnificent ocean view, brightly painted cottages, or a castle teetering on a cliff's edge. Accommodations range from historic manors and repurposed lighthouses to beach yurts-leading many visitors to spend weeks, or even months, completing the journey.

Despite its popularity among road-trippers, the Wild Atlantic Way has never managed to attract as many cyclists, due to its narrow country lanes. But in recent years, car-free sections have been unveiled, giving riders new motivation to saddle up.

Here are the route's four most scenic stretches.

For a vigorous 86-mile tour of the Beara Peninsula, in the country's southwestern corner, begin in the picturesque town of Glengarriff, then take the Healy Pass along the top of the Caha Mountains. The route's hairpin turns are made all the more difficult by the 1,000-foot elevation, but the breathtaking views of Bantry Bay make it all worthwhile.

After your descent, grab a Guinness at MacCarthy's Bar , in the port of Castletownbere, before continuing along the coast to Ballaghboy. Finish your trip by taking Ireland's only cable car to the uninhabited Dursey Island, where you might spot whales or dolphins.

Burren National Park encompasses a rocky, otherworldly landscape in the northern part of County Clare. Start in the spa town of Lisdoonvarna, renowned for its healing sulphur-and-iron-rich springs, and cycle seven miles north to Corkscrew Hill. The aptly named road zigzags through the silvery moonscape of Burren, with its distant views of Galway Bay.

Stop by Poulnabrone Dolmen, one of the oldest megalithic monuments in Ireland, before heading north to Black Head Lighthouse, a tower perched above the churning Atlantic. The final leg of the journey follows a scenic coast road south to Doolin, a seaside town that's known for its hole-in-the-wall pubs and live music.

The desolate beauty of the Aran Islands is arguably best experienced by bike. From Doolin, take a ferry to Inis Oírr and spend the morning pedaling to its most iconic attractions, including its 19th-century lighthouse and the rusted shipwreck of the Plassey. Next, sail to neighboring Inis Meáin, the least developed and populated of the three islands, and overnight at the Inis Meáin Restaurant & Suites (doubles from $580), whose five stylish suites are built of wood, stone, and glass. The following morning, visit the archaeological ruins of Dún Aengus, on Inis Mór, before heading back to the mainland.

This car-free stretch traces the old Great Western Railway line from the quaint town of Westport to Achill Island, just off the western coast. Rewarding must-stops include Newport, a pocket-size town overflowing with charming cafés like the Blue Bicycle Tearooms, and the white sandy beach in Mulranny. If time and energy permit, extend the journey north to Ballycastle to see Dún Briste at Downpatrick Head, a sea stack rising 164 feet above the ocean. 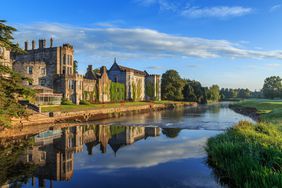 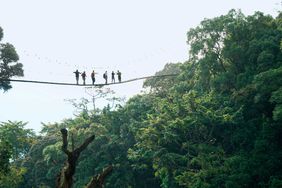