Erika Owen is a writer, editor, audience development expert, and author of a number of books. She loves discovering quirky corners of the world — especially in Iceland, or the larger Scandinavia region — and sharing them with her audience. She's penned more than 350 stories in her 10+ years as a writer, with bylines appearing in Travel + Leisure, Vogue, Architectural Digest, Bon Appetit, and more. Outside of writing and traveling, she's an enthusiastic doodler and will try any art or craft once. * 10+ years of writing and editing experience * 3 published books: "The Art of Flaneuring: How to Wander with Intention and Discover a Better Life," "Lawbreaking Ladies: 50 Tales of Daring, Defiant, and Dangerous Women from History," and "Fodor's Essential Iceland"

The airplane question to end all airplane questions was risen earlier this month on Quora. It reads: "What is a legitimate cause for worry when flying in a passenger airplane? All kinds of noises/movements startle me and I wonder if there are any that would actually be bad news." We've all been there— you hear a rumbling underneath your seat, a slight humming as you board the plane, or a soft whine from the airplane wings and you're off in a downward spiral of the worst possible scenarios.

Mike Leary, a previous Boeing employee who repaired computerized parts of the machines put in 747s, put it best: "People not familiar with airplanes are scared because they are forced to be quiet and go along with acting normal while stuck in a tube hurtling through the air at 600 miles an hour, and 30,000 feet above the earth. What could go wrong?" Luckily, he follows up with a quick "Surprisingly, not much," and continues to explain the various reasons a plane may make specific noises. Here are a few common ones:

Humming As You Board the Plane

"They have an APU at the back of the plane which is the auxiliary power unit. That baby hums along while you are boarding the plane to keep every thing up and running while the main engines are off. In addition, most airports hook the plane up to the ground units to pump air and electricity into the plane to save gas and money."

"When they close the door, you will hear a change and both the air and lights will flicker as they switch from the airport system to the aircraft system. Then they will start each engine and you will hear the whine of the spinup and then the ignition as it fires up, the roar."

"In most Airbus planes, they have a fuel saving device called the power transfer unit, or PTU. It's making sure the hydraulic pressure is balanced when they only use one engine during push-back and taxiing. Everyone wants to save fuel, so this is their option. It's noisy and a bit unnerving as it cycles on and off, on and off, on and off due to pressure fluctuations. It sounds like a dog in the hold with a high pitched bark to some: wooof-wooof-wooof-wooof."

Long Whine Prior to Departing and Before Landing

"Airbus has another, higher pitched servo noise as prolonged whine which happens by the gate prior to departure and then after landing. It's from an electric hydraulic pump used to open and close the cargo doors."

"While the plane is taxiing, the wheels make a bump noise at each tar strip because there isn't much of a shock absorber on airplanes. You'll be able to tell if a wheel is a little out of round because the bump of the tar strips mingle with the speed of the spinning wheels as they speed up and go blump, blump, blump."

Whirring Before the Plane Takes Off

"Your pilot wants the plane to get in the air easily so they flip a switch to make the wings almost twice as wide as they normally are. Those are flaps which make a whirring sound as the servos push them open. You can see them drop down if you're sitting in back of the wing."

"You will hear some small electric motors as the wheels are pulled up into the plane and the snap of the doors closing, first one then the other. It will get noticeably quieter immediately."

Grinding Noise While Slowing Down

"You'll notice a grinding noise as the pilot steps on the brakes just like your car. They willpush down hard to slow the plane making that squally grindy sound and you can feel the pressure of stopping. It usually pulses a little as they press then lighten, then press again."

"[When landing] there's a big bang and that's the landing gear doors being opened again, then [there are] bigger machine noises while the wheels are lowered into place until they lock with a click. Wind is really roaring. The pilot has to see three green lights on his panel to know all the wheels are where they belong and it is safe." 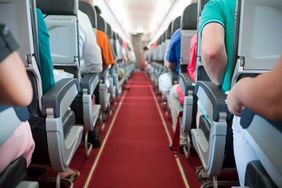