Book a Winter Vacation to the Sunniest Place on Earth

It's probably closer than you think.

If Daylight Savings already has you down thanks to these long, dark, sad nights, then maybe it’s time to book a vacation to one of the sunniest places on Earth.

As the Seattle Post-Intelligencer explained, those looking for a bit more sunshine in their lives may want to head to one of two very distinct and different places: the American Southwest and northeastern Africa.

These Two States Might Soon Opt Out of Daylight Saving Time

Both of these regions, the Seattle Post-Intelligencer reported, register high on the “Sunshine Hours” index by the World Meteorological Association. This means both locations don’t experience a lot of clouds, fog, rain, or have geographic features such as high mountains that would limit light. The locations also have longer days filled with visible light (not counting the light before sunrise and after sunset).

Looking for the absolute sunniest spot? That title belongs to the U.S. city of Yuma, Arizona, which according to the association receives more than 4,000 sunlight hours per year. Additionally, Yuma also averages 11 sunny hours per day throughout the year.

"The Southwest U.S. is under the influence of high pressure most of the year, which translates to a sinking and warming atmosphere above the region," climatologist Michael Crimmins of the University of Arizona, Tucson, explained to the BBC. "This creates many cloud-free days and warm temperatures."

If, however, you don’t care about the warm weather and are only looking to get more hours of daylight, then consider spending your vacation days as far north as possible. And we mean really, really north — like Arctic Circle north.

There, places can go months without the sun ever setting thanks to their position on the globe.

And sure, it may be cold, but all that sunshine is certainly doing something for the people of countries like Norway. They go several weeks without seeing the night sky every year, and they happen to be considered the inhabitants of the single happiest country on Earth.

If you’re looking to go to the extremes for the midnight sun, travel to the arctic islands of Svalbard, where, according to Visit Norway, the sun doesn’t set between April and late August.

There, you can go on a midnight walk on a glacier under a red-colored sky or take a dogsledding trip along the North Pole, all while the sun still hangs high enough in the sky to bring you all the sunshine and joy you’ll need to last until Daylight Savings finally ends. 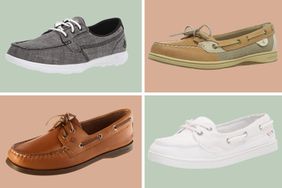 The Best Boat Shoes for Women