There’s nothing quite like seeing Paris’ Eiffel Tower lit up at night, wading through the bright water and pristine beaches of Thailand, or watching Iceland’s famed Geysir erupt. But there’s one thing these destinations all have in common: a ton of tourists.

To combat the trend of Instagramming crowds swarming a destination, tour company Intrepid Travel released its annual list of lesser known and less frequently visited locations — their “Not Hot List” — to steer travelers toward communities that could benefit from tourism dollars and alleviate the burden of overtourism.

“The global tourism industry is changing, and travelers are becoming increasingly conscious about their actions especially with protests such as the Global Climate Strike shining a light on environmental issues,” Intrepid Travel’s CEO, James Thornton, said in a statement. “The general public’s awareness has shifted and there is a desire from tourists to ensure they are benefiting the communities they visit and local people they meet, while respecting their cultures, economy and the environment too. The ‘Not Hot List’ aims to meet this growing demand and promote lesser-known destinations that are just as worthy of travelers’ time.”

Overtourism has been an issue for years as people from all over the world flock to Instagrammable as well as highly sought after cultural destinations. For example, in Thailand, the government closed the famous Ko Phi Phi Le’s Maya Bay (of the 2000 Leonardo DiCaprio film "The Beach" fame) indefinitely due to overtourism and has been trying to encourage visitors to seek out experiences in other parts of the country. And in New Zealand, the government will tax tourists in an effort to combat overtourism.

To encourage people to look beyond the well-traveled path, Intrepid’s list covers intriguing destinations all across the world, often building on what people already love about a country (like spending time with an elephant herd in Cambodia) while exploring lesser visited areas. Here is Intrepid’s 10 “Not Hot List” destinations and why they say you should head there now.

Experience white sand dunes and gorgeous beaches on the edge of the Sahara in this Moroccan city. And when you get hungry, feast on fresh seafood right from the Atlantic waters.

Intrepid says that The Gambia may receive far fewer visitors than other popular African destinations like South Africa and Kenya, but abundant birdlife and pristine beaches make it a great place to explore the continent from.

Marvel at towering icebergs and expansive landscapes on the largest island in the world. Intrepid says Greenland has a population of less than 60,000 people, making it the perfect place to claim your own piece of quiet (and chilly) paradise — while you’re there, at least.

Intrepid calls these remote Canadian islands the “Galapagos of the North,” noting its diverse wildlife like grizzly bears, whales and sea lions. The islands are the ancestral home of Canada’s Haida First Nations people and travelers can visit local villages as well as hear First Peoples’ stories while there.

Sip wine at a local winery with more than 120 miles of underground passages and about 2 million bottles before standing in awe of a 14th century cave monastery in this tiny country in Eastern Europe (pictured above). And take in the country’s Soviet past by noting architecture like buildings built with pre-manufactured concrete slabs.

Volcanos and lush vistas beckon in this Central American country where visitors can feast on classic Nicaraguan dishes like tamales. While there, learn about the country’s revolutionary history before heading to the beach for a relaxing end to the trip.

While one of Cambodia’s biggest tourism draws tends to be the famed Angkor Wat, there is so much more to discover in this Southeast Asian country. Hang out with a herd of elephants in their natural habitat, chase waterfalls and discover temples that are less famous but still breathtaking.

Discover ancient ruins and boundless sand dunes in Sudan. Intrepid said that while the country was included in President Donald Trump’s most recent travel ban, they hope it’s actually a catalyst for more people wanting to visit as travelers in the past have wanted to learn more about countries they hear about in the news.

When people think of Indonesia, they tend to think of Bali. And while Bali and its beaches are wonderful, there is much more to discover in the country. In Sulawesi, Intrepid says travelers can walk through dense bamboo forests and boat past green rice paddies, making it a perfect place to explore the Southeast Asian nation from.

Tajikistan boasts the chance to discover the history of the Silk Road with “crumbling reminders of Soviet influence,” according to Intrepid. And one of the best parts of this Central Asian country, according to the tour company, is how little it has changed over the years, allowing travelers a truly unique experience often sought but rarely found. 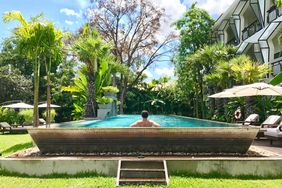