Dozens gather every year to take the plunge.

If everyone else jumped off a bridge, would you do it too?

For the last 450 years, Mostar, in Bosnia and Herzegovina, has been home to the Old Bridge Jump, where people jump off the city’s Stari Most bridge, hurling through the air for a few seconds before hitting the freezing water below.

The 451st annual bridge jump and diving competition took place on Sunday, July 30. Fifty-seven competitors were expected to participate in the jump, including both locals and tourists from around the globe.

According to Australian website News.com.au, the traditional jump is seen as a right of passage for Bosnian men in particular: “Locals say a man will be a complete life failure if he doesn’t take the plunge — he can forget about a job and a girlfriend.”

The plunge is about 78 feet from the top of the arched bridge to the incredibly cold waters below. Over the years, many injuries and a few deaths have been reported, especially during years when the water was shallow or when the jumpers did not have assistants below to help them to shore.

According to News.com.au, the Mostari Diving Club charges tourists 25 euros for their first jump, but once they’ve successfully completed a dive, they’re free to dive again free of charge for life.

Every diver has been recorded in a ledger for posterity. As of 2015, only five women were on the list.

After the brave divers complete the plunge — the event ends with some divers who jump with torches — there is an after-party in honor of all the jumpers.

A good party will definitely help cure the sting from that icy water. 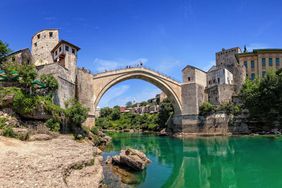 The Most Beautiful Bridges in the World