Cities Around the World Are Cracking Down on E-Scooters

After their burst of popularity, electronic scooters are getting banned or temporarily suspended in cities around the world, as accidents, including ones that are fatal, increase.

This month, Singapore announced a temporary ban on e-scooters on sidewalks after several accidents and one fatality. It could become an all-out ban next year, Lam Pin Min, Singapore's senior minister of state for transport, announced, according to CNN.

Last month, France banned e-scooters from pavements and introduced new rules regarding riders, including that they must be at least 12 years old. "Sidewalks are only for pedestrians," Paris Mayor Anne Hidalgo tweeted earlier this year and announced that a rider on a sidewalk would be fined.

Nashville's mayor tried to ban the scooters over the summer after a fatality but it was overturned by the Metro Council, according to the Tennessean. Meanwhile, Forbes reported that Los Angeles also threatened a ban with Uber's scooter company, Jump.

Even though during the initial roll out of this new mode of transportation was positive, now it's important for riders to check their city's or the city their traveling in for specific scooter rules or else risk a fine. Some are allowed in bike lanes, some are not, some sidewalks and okay and others are not. Some cities may fine you for leaving your scooter in the wrong place.

Residents have noted that scooters left in the middle of the street — once thought of as a perk with no need to dock it — have incurred particular ire as they may be difficult for some pedestrians to avoid or worse, can become hazardous for someone who is disabled.

Proponents of the scooters defend the scooters' low environmental impact — but it may not be as good as they believe. A study from North Carolina State University found that traveling by e-scooter has a higher carbon footprint than travel by bus or moped (as well as by bike or foot).

There are more than 100 cities across the U.S. that allow public scooter shares and last year, more than 84 million rides were taken on the e-scooters. However, as cities adapt to this rapidly-growing form of transportation, we're likely to see stricter rules and tighter regulations on where and how they're allowed to operate. 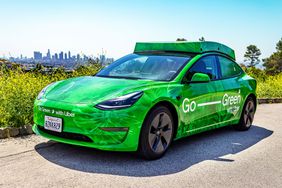