The beautiful horse is named Fern.

Queen Elizabeth has finally come out of hiding.

In April, the reigning British Monarch made the decision to self-quarantine with her husband, Prince Philip, and 22 staffers in Windsor. According to palace officials, the Queen made the quarantine decision in an attempt to stay safe and wait out the spread of the coronavirus.

Since then, the Queen has maintained an incredibly low profile, only making a handful of video appearances to help show her solidarity with her nation. However, over the weekend, Queen Elizabeth finally stepped out — or should we say rode out — into the limelight once again.

According to the BBC, Queen Elizabeth was spotted over the weekend riding her 14-year-old Fell Pony named Balmoral Fern on the grounds of Windsor Castle. The royal family even shared the images of the Queen on their own Instagram account as well.

"The Queen is pictured riding Fern - a 14-year-old Fell Pony - in Windsor Home Park this weekend,” the caption read. “Her Majesty has enjoyed riding since childhood and is closely involved with the welfare of the horses she owns for breeding, riding, and racing.”

The Queen’s love of animals is a well-documented one. As Travel + Leisure previously explained, Queen Elizabeth has owned quite the menagerie over the years — including two sloths, a colony of bats, was gifted an elephant, and she even technically owns all the swans in the river Thames. And, of course, she’s owned a number of horses.

Her love of horses has even helped her turn a pretty penny over the years too. Over the last three decades, the Queen has pulled in a reported $8.8 million in winnings from her racehorses. The Queen’s horses have a winning percentage of 15.9 percent, making her the 11th most successful owner in flat racing over a three-decade period. Still, nothing will ever come close to her love of corgis. 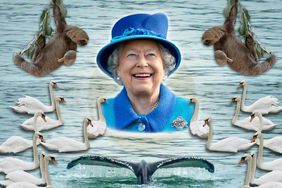