In 2016, the British Royal Family announced it would be giving Buckingham Palace a major renovation. At the time, the family estimated the upgrade on the royal home, which has served as the official London residence for the family since 1837, would likely cost somewhere around 369 million pounds, or about $455 million, over the next decade. And now, just a few years into the project, the family is giving fans everywhere a glimpse at how the project is proceeding.

"Watch as historic nineteenth-century wallpaper from the Yellow Drawing Room is carefully taken away for conservation," the royal family shared on Instagram. "Not only will this work restore the rare, fragile wallpaper, but it will simultaneously protect it from incurring damage from nearby construction work as part of the Reservicing program. Once the works are complete, the restored wallpaper will return to its home in the Yellow Drawing Room."

As wallpaper conservator Allyson McDermott explains in the video, the team is "very carefully removing the wallpaper, beautiful 19th-century Chinese wallpaper, piece by piece." It will then be taken back to private studios to undergo a preservation process so it can last on for generations to come. "This is the perfect time. The paper is desperately in need of conservation. It's very acidic. It's very fragile. And this is just a wonderful opportunity to do it whilst all the work is being carried out at the palace."

The East Wing of Buckingham Palace, the caption of the post explained, was built for Queen Victoria and designed by Edward Blore in the 1840s. It was meant to provide more entertaining and living space for Victoria and her growing family. The space includes the central balcony on the front facade of the Palace, which is still used for public appearances today, including the family's gathering for the annual Trooping the Colour.

According to the posting, the reservicing program is "vital" in order to mitigate the risk of fire and flood to the aging home. The upgrade will also ensure that the old (and potentially dangerous) electrical wiring throughout the house is brought "in line with current health and safety standards." The family added, "the refurbishment will also improve visitor access and make the Palace more energy efficient."

Want to see more from the renovations? Check out a few of the hidden treasures workers have found in the walls and floors of Buckingham Palace along the way. 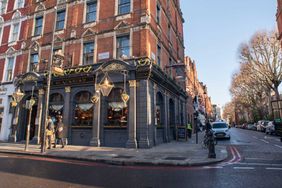