The best time to go to Vegas for low prices, small crowds, comfortable weather, and more.

Las Vegas is one of the most visited and celebrated destinations in the United States. And Sin City doesn't turn off — crowds gather all year for 24/7 access to fun. Whether visiting Las Vegas for a bachelor(ette) party, trade convention, or just to take in the gambling, food, shows, and party scene, everyone is here to have a good time.

Las Vegas is located in the desert, so daytime temperatures in the summer regularly reach triple digits, which can put a damper on outdoor activities. On the plus side, the winter heat is a nice escape for anyone fleeing ice and snow.

Weather-wise, the best times to visit Las Vegas are spring and fall, with highs hovering around 70 degrees in March and the low 80s in October. March, April, May, October, and November have the best weather for walking the Las Vegas Strip, enjoying dinner outdoors at Lago (with views of Bellagio's dancing fountains), and getting out in the desert for hikes and ATV adventures.

Meanwhile, August is the hottest month in Las Vegas and one of the least expensive times to visit. Even sitting by the outdoor pools this month can get too hot, as temps of 105 degrees aren't uncommon.

Winter in Las Vegas is pleasant, but probably too cool to swim — and many pools are closed from October through February. Still, the temperatures rarely dip below freezing and you're unlikely to see snow outside of the ice rink at The Cosmopolitan of Las Vegas.

With its huge range of event spaces, Las Vegas is one of the world's most popular destinations for conventions and festivals. Some years, the city draws more than five million convention attendees — second only to gambling visitors. You might want to run a quick Google search to double-check that your Las Vegas trip doesn't coincide with a large trade event. If it does, expect to make flight and hotel reservations in advance.

During popular conventions, Las Vegas bookings and prices surge. Keep an eye out for the Consumer Electronics Show in January and the Electric Daisy Carnival in May. December used to be a relatively quiet month for Las Vegas until the National Finals Rodeo decided pre-Christmas was the time to host the "Super Bowl of rodeo." Now, you'll see about 100,000 cowboys and cowgirls taking in the Fremont Street Experience's 50-foot-tall Christmas tree.

Sports fans flock to Vegas for the Golden Knights' hockey season, which runs from October to April, with playoffs in May and sometimes into June.

Note that some swimming pools close (or reduce operating hours) from October through February, so check with your hotel if you wish to spend afternoons by the water. The epic daytime pool party scene also officially kicks off in March in Las Vegas. During this time, bikini-clad guests queue up in long lines for parties at Encore Beach Club at Encore and Wet Republic at MGM.

Technically, the Las Vegas Strip isn't in Las Vegas — it's in an unincorporated part of Clark County. But most visitors equate the Strip as the heart of Sin City. It runs over four miles long, along Las Vegas Boulevard, and is home to about 30 of the most iconic casinos, new and old.

The central artery is where you'll find The Mirage's Volcano, The Venetian's canals, and roaming showgirls in feathers available for tipped photo ops. There are no open container laws in Las Vegas, meaning you can legally drink on the street, as long as the alcohol isn't in a glass container. Just remember to drink water, too.

Walking the Las Vegas Strip in the heat of summer is a challenge, and could be downright dangerous if you're dehydrated or not used to the high temperatures. Instead, buy an all-day pass (around $8) for a seat on the Deuce, a bus that runs up and down the Strip, 24 hours a day.

Visiting the Las Vegas Strip is most pleasant when the weather is comfortable in the spring and fall — but these are also pricier and more crowded times. The shoulder season, which falls in April and September, is the sweet spot for pricing and weather.

Another pro tip? Book a midweek Las Vegas trip for lower hotel prices. Locals and Californians tend to visit the Las Vegas Strip in droves on weekends, driving up prices. This is an especially smart timing tactic while school is still in session and families aren't on summer break.

Sin City has something to offer 12 months of the year, so there isn't a wrong time to go. But it's a bit of a conundrum: If you visit when the weather is the most pleasant in late spring or early fall, you'll have to deal with higher prices and larger crowds. Meanwhile, travel to Las Vegas in August and December, and you'll pay less, but the weather is tricky and some pools and events will be closed or slow.

One sure time to avoid Las Vegas if you want to skip the crowds and high prices? New Year's Eve. Sure, the parties are epic, but the revelry draws nearly half-a-million people to the Strip.

Our best advice? Go to Las Vegas whenever you can get there. You're guaranteed a good time. 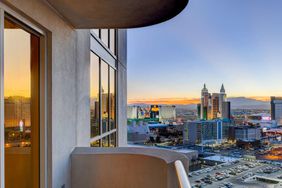 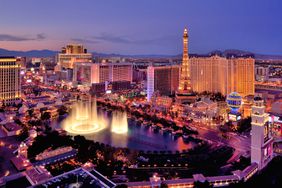 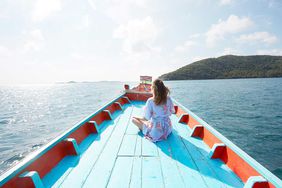 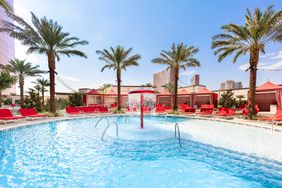 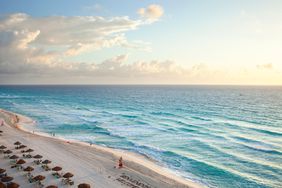