Some countries are easier than others for expats.

A new study from HSBC reveals that the top place to live as an expat is Singapore.

The study was conducted among 27,000 expats in about 100 countries between March and May 2016. Third party survey group YouGov conducted the poll, which did not survey HSBC customers alone. The financial services company reached out to expats through social media, online communities and other channels to find a wide pool of respondents.

Singapore received high marks from expats on economics, family life, and overall experience in the country.

Emily Abbey, a 28-year-old blogger, recently moved with her husband and two young children to Singapore from the rural county of Devon in the U.K. While the move has of course presented challenges, Abbey raved about her experience.

“There are so many expats here that once you find your crowd...you soon forget about how far away from ‘home’ you are,” she told Travel + Leisure in an email. “I'd absolutely recommend making a big move to anyone, and Singapore is a really easy first step into Asian life and expat life.”

“Everything is available here if you need some home comforts, but you can also live [like] a local and immerse yourself in Asian culture,” she said.

Survey respondents rated safety and finance especially high, placing Singapore second and third overall of the countries surveyed, respectively. Eighty-four percent of respondents said they felt safer in Singapore than they did back home.

Abbey noted her own feeling of security, even when out late on her own or with girlfriends. The mix of city and small-town vibes that Singapore provides were also a top benefit, according to the blogger.

“I can wander around the local markets and hawker stands eating local foods and taking in the sights and history of Singapore, then jump on a bus and be in downtown Singapore within a half hour and be living the ultimate city girl dream,” she said.

Career growth, economic confidence and savings also received top marks from expats living in Singapore. Around 62 percent respondents said their earnings had improved. And that might not come as a surprise, seeing how the average expat in Singapore earns $139,000 annually, CNBC reported.

New Zealand came in a close second on the HSBC study, followed by Canada and the Czech Republic. New Zealand achieved especially high marks in the family categories of tolerance, and quality of life, while taking hits in the savings and wage growth categories. The Czech Republic was a new addition to the top tier, up from the 18th place ranking in 2015. 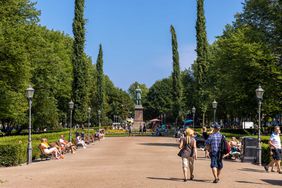