Why the UK Is Keeping Thousands of Red Phone Booths, Even Though Everyone Has Cellphones

Officials say that they still serve as a lifeline for many in times of crisis.

As cell phones have pushed phone booths around the world into the endangered relic territory, the UK has deemed that thousands of its iconic red phone booths will be protected.

The British telecommunications regulator Ofcom has proposed new rules to save about 5,000 of the country's 21,000 booths—known as phone boxes in the UK— due to the fact that they're still in use, especially during emergencies, The Associated Press reported this week.

"Some of the call boxes we plan to protect are used to make relatively low numbers of calls," Ofcom's Director of Connectivity Selina Chadha told AP. "But if one of those calls is from a distressed child, an accident victim, or someone contemplating suicide, that public phone line can be a lifeline at a time of great need... We also want to make sure that people without mobile coverage, often in rural areas, can still make calls."

The protected payphones will be ones in regions with little or no phone service, as well as areas that are accident or suicide hotspots. Any phone that has had more than 52 calls made in the last year will also be saved.

From May of 2019 to May 2020, nearly 150,000 calls were made from payphones to emergency services, and an additional 45,000 were made to other helplines, such as Samaritans, an organization in the UK and Ireland that supports those who need emotional support or at a suicide risk.

About half of the UK's phone boxes have already been removed, according to BT Group (formerly known as British Telecom), and more than 6,500 of them have found new purpose through the Adopt a Kiosk initiative, where authorized community groups can purchase one for £1.

While some serve life-saving needs in other ways, like storing public defibrillators and others have found more creative uses. One in Warley, West Yorkshire, was converted into the World's Smallest Museum, while in another in North Yorkshire bought by the community of Settle, Queen musician Brian May once hosted an art gallery exhibit. 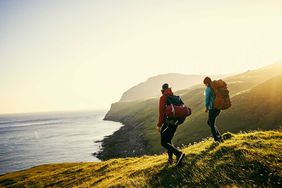 The Best Outdoor Gear You Can Buy, According to Lifelong Hikers