Every seat in the fleet will soon feature a seatback entertainment screen and larger overhead bins for carry-ons.

United Airlines just announced the purchase of 270 new aircraft from Boeing and Airbus on Tuesday, marking the largest purchase in the airline's history and the start of a complete experience overhaul.

With the purchase, part of a new initiative called "United Next," the airline plans to increase seat capacity by almost 30% by 2026. Over the next five years, premium seats available per flight will increase 75% in its North American network, and fuel efficiency will improve by 11%.

Passengers will notice a difference as soon as they board the new aircraft. Seats in the fleet will soon feature a seatback entertainment screen and larger overhead bins for carry-ons. The planes will also boast the "industry's fastest available in-flight WiFi, as well as a bright look-and-feel with LED lighting," according to a press release. The aircraft will also be complete with Bluetooth capability so passengers can connect to entertainment features via their wireless headphones.

"We'll deliver a better, more consistent experience, with more features for more customers, faster than ever," Andrew Nocella, United's EVP and Chief Commercial Officer, said in a statement. "Our new, signature interior creates a more consistent product across our mainline fleet - with a focus on the amenities that customers value most like seat back screens, fast WiFi, and extra storage - to further set ourselves apart."

The first new plane featuring the "United Next" interior, a Boeing 737 MAX 8, is expected to set flight this summer. The first of the airline's new 737 MAX 10 and A321neo will begin flying in early 2023. Planes in the current fleet will receive a "nose-to-tail" transformation over the coming years. Passengers can expect to see 99% of the fleet renovation completed by the summer of 2025. 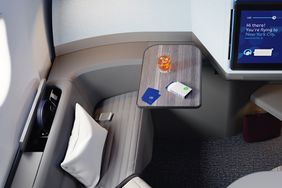