Just as an example, in one day alone at Newark, nearly one-third of our workforce called out sick," United CEO Scott Kirby said.

United Airlines was forced to cancel hundreds of flights after about 3,000 employees in the United States tested positive for COVID-19, the carrier's CEO said on Tuesday.

To cope, United is working "to get ahead of the impact by acting early to cancel flights when necessary and notifying impacted customers in advance of them coming to the airport – we're also reducing our near-term schedules to make sure we have the staffing and resources to take care of customers," CEO Scott Kirby said in a letter to United employees, adding, "The Omicron surge has put a strain on our operation ... Just as an example, in one day alone at Newark, nearly one-third of our workforce called out sick."

The sick employees represent about 4% of the airline's total U.S. workforce, according to Reuters.

On Tuesday alone, United canceled 154 flights, the most of any other U.S. airline, according to FlightAware. As of Wednesday morning, the carrier had already canceled 120 flights and delayed 32, and canceled more than 60 in advance of Thursday.

But United is not alone. Airlines across the country and around the world have been forced to cancel flights by the thousands in recent weeks, blaming weather and staffing shortages caused by the omicron variant.

On the bright side, Kirby said United has seen eight straight weeks without any COVID-19-related deaths among vaccinated employees, according to the letter.

United was the first U.S. airline to require all its employees to be vaccinated over the summer. Last month, Kirby said the airline was forced to fire about 200 employees who did not comply with the vaccine mandate out of its 67,000 employees, according to Reuters.

Kirby said in the letter "since our vaccine policy went into effect, the hospitalization rate among our employees has been 100x lower than the general population in the U.S." 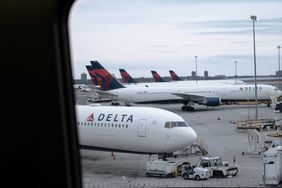