For a taste of Americana, there is nothing like a road trip. Whether you're trucking along Highway 1 or Route 66, one thing is certain: stopping at roadside stores is as much a part of the trip as the drive itself. Sure, you may know about iconic regional chains like Wawa or Sheetz, but one business owner is hoping you'll soon be as familiar with Stuckey's.

In the 1960s, Stuckey's was a roadside staple with more than 360 locations across 40 different states. But when the family business acquired new owners, locations began to shutter and now its CEO, and granddaughter of the founder, Stephanie Stuckey is helping revive the roadside chain with the help of social media.

Since taking over three years ago, Stuckey has brought her grandfather's legacy from six figures in debt to pulling in $2.5 million in annual profit, according to Beaumont Enterprise. And to do it, she's relying heavily on nostalgia and selfie videos.

Stuckey's was born in 1937 when Stephanie's grandfather Sylvester began selling pecans by the side of the road. However, sales weren't fantastic, so his wife Ethel (Stephanie's grandmother) decided to turn the pecans into a candy. She invented the Pecan Log Roll, which quickly became the stand's bestselling item. When customers began coming to the stand for its candy, Sylvester decided to add souvenirs to his offerings.

And the Stuckey's roadside legacy was born.

In the 1960s, Stuckey's was famous among American drivers for its teal-colored roofs with steep peaks. You could spot one from far down the highway and, pretty soon, you'd find yourself pulling over for a Pecan Log Rolls. But after some business mergers, Stuckey's began disappearing from roadsides. The remaining Stuckey's locations became franchises — or their roofs were painted and sold to different businesses and it seemed like Stuckey's was about to fall out of American consciousness.

When Stuckey took over the family legacy three years ago, her plan was to turn Stuckey's from a flailing roadside business to a bonafide pecan competitor. Now, Stuckey's Pecan Log Rolls are stocked in more than 5,000 different retail locations — many of which Stuckey highlights on her TikTok page that celebrates the American road trip.

"I tell stories of road trips. I celebrate small-town America," she told Beaumont Enterprise. "I post about the places that are fun that you can visit. And so, we are bringing back the road trip in a different way."

These days, the business's focus is mostly on the candies. But Stuckey hopes that she can bring back some of the "ghost store" locations that have fallen into disuse. A scroll through her TikTok page reveals fans in the comments, desperate to relive childhood roadtrips with a stop at Stuckey's.

To find a location to visit on your next road trip, visit the Stuckey's website. 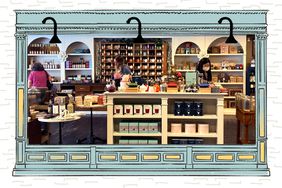