Total Strangers Were Caught Having Sex on a Plane — Again (Video)

Last week, two strangers aboard an 11-hour Virgin Atlantic flight from London to Cancun were caught in a rather compromising position. Cabin crew opened the bathroom door to discover a man with his pants down — and a woman sitting on the toilet.

Before getting on the plane, the two passengers (both in their late 20s) were complete strangers. But shortly after takeoff, they struck up a conversation across the aisle.

And it wasn’t long before they were making out.

“Minutes later, she disappeared into the toilet, and he followed her in,” a fellow passenger told The Sun. “It was so obvious. Everyone knew what was happening because she had been so loud and rowdy.”

The man tried to argue that the woman was ill, and he was in the bathroom to lend a helping hand. “You’re not even traveling together," a flight attendant countered. "Why were you in there?”

Passengers told The Sun that the woman was drunk when she showed up for the flight at 12:30 p.m. When she returned to her seat from the bathroom, her disruptive behavior continued. The woman got in a fight with her friend and travel companion.

Police detained the woman upon arrival in Mexico for acting “in an abusive and threatening manner which severely disrupted the flight.”

The woman was banned from all future Virgin Atlantic flights for “repeatedly refusing to comply with crew requests, and for disruptive behavior throughout the flight,” an airline spokesperson said in a statement.

This isn't the first time two strangers were caught committing salacious acts on an otherwise extremely unsexy flight. In October, a 28-year-old man and 48-year-old woman attempted to join the Mile High Club — this time, in their seats. 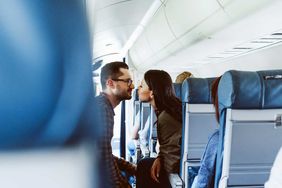 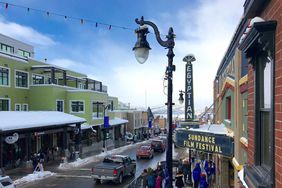 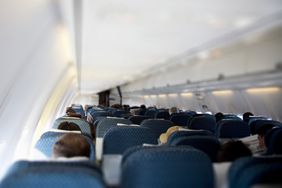