In addition to the name change, the resort has also debuted a new logo, which features an eagle over two mountain peaks.

The historic California ski resort formerly known as Squaw Valley announced that it is renaming as Palisades Tahoe, after a yearlong process and research into its offensive name.

"While this may take some getting used to, our name change was an important initiative for our company and community," Palisades Tahoe President and COO Dee Byrne said in a statement shared with Travel + Leisure. "At the end of the day, 'squaw' is a hurtful word, and we are not hurtful people."

The Washoe Tribe of Nevada and California, who has lived in the area for thousands of years and whose ancestral lands are in the valley, released a statement Monday saying that it "commends and fully supports [...] this milestone decision."

"Over time, the word 'squaw' came to be used as a derogatory and racist term against Native American women," the statement read. "Native American communities across the country have been working for years to have this term removed from place names in their ancestral lands."

The new name — which means steep, high cliffs — refers to the resort's unique terrain, which includes sheer granite faces and chutes. In addition to the name change, the resort has also debuted a new logo, which features an eagle over two mountain peaks.

Palisades Tahoe will cover both the current Squaw Valley and Alpine Meadows ski resorts. The term "Olympic Valley" will refer to the former Squaw Valley when necessary. (The resort was founded in 1949 and made history when it hosted the 1960 winter Olympics.)

Although the name and branding changes are effective immediately, it will take more than a year for all signage around the resort to change.

Palisades Tahoe has also begun a partnership with the Washoe Tribe that will give the tribe a platform to educate visitors about their ancestral land and ensure access to the mountain for present and future generations. The resort will also install a Washoe exhibit at its mid-mountain lodge, featuring tribal artifacts and culture. 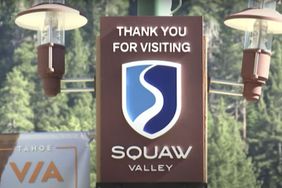