The study was based on customer complaints.

The year 2020 was a turbulent one for U.S. airlines, but one carrier came out on top with far fewer customer complaints, according to a new study: Southwest.

In fact, the study wrote Southwest was the only rated carrier to maintain nearly the same score it held before the COVID-19 pandemic, with others seeing their scores drop by anywhere from 40% to 800% from 2019.

The study found complaints over refunds reigned (they made up nearly 83% of all complaints last year), but other measurable factors like on-time performance and mishandled bags actually saw an improvement compared to 2019.

Allegiant, which came in No. 2 this year after taking the top spot in 2019, had the best baggage handling performance with 1.48 mishandled bags per 1,000 checked bags. However, the airline clocked the worst on-time performance at 71.3% in 2020.

And Delta Air Lines, which recently eliminated its pandemic-era policy of blocking the middle seat, took the No. 3 spot on the list, an improvement from its No. 4 ranking in 2019.

Dr. Brent Bowen, who co-authored the study, said in a statement "the traveling public is eager to fly again. Consumers have renewed confidence in air travel and are putting in action the plans they made during the pandemic. The industry is seeing a solid return to passenger volumes."

That's demonstrated by the record numbers of passengers passing through U.S. airports. On Sunday, the Transportation Security Administration screened more than 1.6 million people, the most passengers the agency has seen in any single day since March 2020.

More and more customers are taking to the skies, but that doesn't mean flying is back to normal just yet. The TSA has extended its mask-wearing requirement until at least September, and the Federal Aviation Administration has cracked down on unruly passengers after seeing a rise in reported incidents. 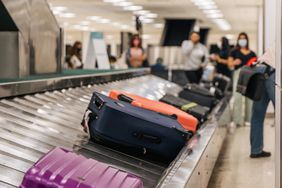