"The place was left in absolute shambles," the Airbnb host said.

An Airbnb host in the Scottish Highlands recently faced her worst nightmare. After booking a group of seven for her holiday cottage, she was shocked to find that over 23 additional guests showed up as well.

Sheri Murphy and her husband, Martin, were notified by a neighbor that there were 12 cars parked in the driveway of their cottage. Knowing that this was more than what was listed on the booking, the Murphys made their way to the home to check things out. What they found on arrival was shocking. Tents had been pitched across the home's garden and belongings were "strewn" around, including a long sword and axe.

The cottage keeper told the Murphys that around 30 to 40 men were seen "praying on the beach," according to the outlet. The Murphys suspect it was a religious gathering, especially after finding the axe and sword.

Police were contacted in an effort to get the group off of the property. After three hours, the men finally vacated, leaving behind the tents, as well as their shoes and clothes.

"The place was left in absolute shambles," Sheri said.

Airbnb was notified and extended assistance to the Murphys. The men were ultimately banned from the platform.

"Unauthorized events are banned on Airbnb and we have zero tolerance for violations," a spokesperson for Airbnb told The Independent. 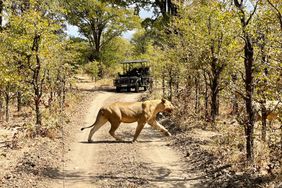