The Royal Family Has a 'Resident Clock Master' Who Has to Turn 1,500 Clocks Back During Daylight Savings

It takes an entire team a whole weekend.

Think having to turn your oven's clock back over daylight savings is a pain? Try having to maintain the Queen's 1,500 timepieces back over a single weekend.

In the wee hours of Sunday morning, the United Kingdom turned its clocks back one hour, a week before the United States does the same. In an effort to remind people to change the clocks in their house, the British royal family took to social media to show how they, or rather a team of experts, turn back the hundreds of clocks inside Windsor Castle.

The Daily Mail explained, an entire team of horological conservators worked through the weekend to turn back time on the Queen's timepieces throughout the estate. The Royal Family shared a glimpse of the work, featuring their chief horologist alongside the caption: "For those living in the UK, don't forget that clocks go back an hour tonight."

The account added, "Did you know there are over 1,000 clocks within Her Majesty's official residences? Each timepiece is conserved by a special horologist and each will be set back an hour this Sunday."

The account shared more footage of the timepieces and the family's horological conservator explaining, "We have 400 clocks on the estate of which 250 are inside the castle and the rest are distributed around the estate. I go round once a week to wind them up so I get to know every clock very well."

The conservator added, it's a far lengthier process to turn the clocks backward in the fall, however, "in summer it's much easier because every clock just goes forward one hour and each time it takes me about a weekend to set all the clocks to the right time."

And really, you'd hope the team would take their time moving each clock an hour twice a year. As the Royal Collection Trust explained, the entire Royal Collection contains "some of the finest historic clocks in existence, many of which are on display to visitors at Windsor Castle and The Palace of Holyroodhouse. They reflect mechanical innovation over the centuries and the tastes of successive monarchs. Among the 1500 timepieces in the Royal Collection are musical clocks, astronomical clocks, miniature clocks and turret clocks."

See more about the clocks here, and if you're in the United States don't forget to set a reminder to change your timepieces next weekend, too. 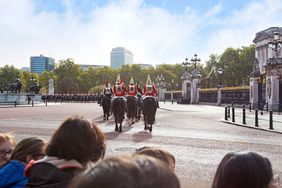