Rome's Colosseum is getting a brand-new $22 million retractable floor that will provide visitors with a look into the past.

Announced Sunday by Culture Minister Dario Franceschini, the new setup would allow visitors to stand on the floor of the arena and experience a view of the Colosseum like the ancient gladiators would have seen it during their battles, The Associated Press reported.

The original floor of the Colosseum was removed in the 19th century when archaeologists wanted to explore the underground tunnel system beneath the historic arena.

The retractable floor is due to be completed in 2023.

The project will cost an estimated $22 million (€18.5 million) to complete and will be able to quickly cover or uncover the structures beneath the Colosseum and protect them from the elements.

"It's another step forward toward rebuilding the arena, an ambitious project that will aid the conservation of the archaeological structures while getting back to the original image of the Colosseum," Franceschini said, according to The BBC.

Once the floor is completed, the Colosseum may host cultural events, restoring one of its historic purposes.

The renovation plan was created by Milan Ingegneria, the winner of a design competition from the Italian government in 2020. The design involves hundreds of wooden slats that can be rotated to allow natural air and light into the spaces beneath the Colosseum.

The Colosseum reopened to the public last week, after a 41-day shutdown caused by coronavirus regulations. Although the Colosseum is welcoming visitors, numbers are still far fewer than normal. Capacity at the attraction is limited to only 1,260 visitors per day. In 2019, the Colosseum could receive as many as 25,000 visitors per day during its busiest season. 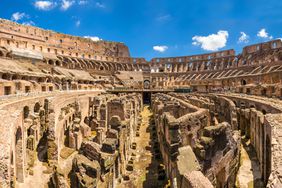 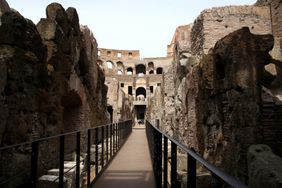 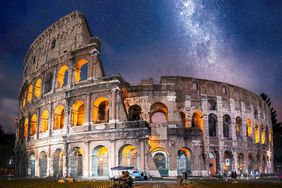