You could soon see your favorite play or band live at one of the world’s most historic venues.

The Colosseum may be closed, but Italian officials are already envisioning a post-pandemic world where visitors can experience concerts, theater, and even stand in the center of a space that once hosted Rome’s iconic gladiator shows.

The Italian government is seeking proposals from engineers to build a $22.5 million retractable floor for the Colosseum, the BBC reports. Proposals are due Feb. 1, and Italian officials hope to complete the ambitious project by 2023.

"It will be a major technological intervention that will offer visitors the opportunity to, not only see the underground rooms... but also appreciate the beauty of the Colosseum while standing in the centre of the arena," Italian Culture Minister Dario Franceschini told the BBC.

As it is now, the Colosseum has no floor. Visitors instead see the underground labyrinth of tunnels and system of pulleys and trap doors once used by Rome’s gladiators and the wild animals they fought. The network has been exposed to the elements for hundreds of years.

The retractable Colosseum floor would close during inclement weather and to create space for concerts and other live performances. Gladiators will not be returning, Colosseum Director Alfonsina Russo told The Times. “The arena will be used for high culture, meaning concerts or theater,” he told the paper.

The Colosseum closed in March as Italy shut down most of its economy to stem the spread of COVID-19. It reopened in June but closed again in November as a second coronavirus wave tightened its grip on Europe. 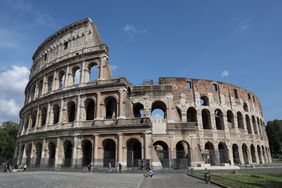