Adorable Twin Panda Cubs Make First Appearance at Tokyo Zoo — With Over 1,000 Visitors to Greet Them

In a highly-anticipated event, a set of newborn panda twins, Xiao Xiao and Lei Lei, made their first public appearance at a Tokyo zoo last week.

The two giant panda cubs were born at Tokyo's Ueno Zoo in October, but haven't been seen by the public until now. And just like any up-and-coming star, their first appearance was brief and left fans clamoring for more.

"My heart thumped with excitement when I first saw them," a visitor to the Panda cub exhibit, told The Associated Press. "It's so comforting to see them."

Despite the zoo being closed due to a spike in COVID-19 cases, the panda exhibit opened for the special event. Over the course of three days, 1,080 visitors won slots in a lottery to come to see the newborn cubs play in their enclosure.

For two hours each morning, six people at a time were allowed into the panda's enclosure. They were allowed to stay for one minute before the next group entered.

Ahead of their public debut, Xiao Xiao and Lei Lei underwent some training to prepare for their fans. The twins, along with their mother, were placed in an enclosure along with radio sounds mimicking the noise and voices of future admirers.

Wild pandas are found only in China, particularly in the mountains of Sichuan where there is plenty of bamboo. To help breed the animal, China loaned out its unofficial national animal through the long-standing program of panda diplomacy. All pandas, including those born abroad, must eventually be returned to China.

Ueno Zoo received its first pandas from China in 1972, according to The Japan Times. The newborns' elder sister Xiang Xiang was born at the zoo in 2017 and is due to fly to China in June. 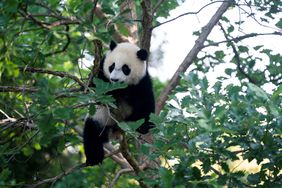 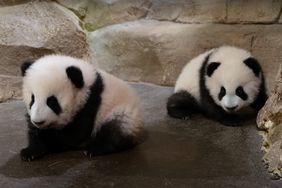