Three tourists were kicked out of Machu Picchu on Tuesday after taking pictures of their bare buttocks in front of the Incan ruins.

“The three tourists dropped their pants to show their buttocks and took photos,” police official Martin Flores told AFP, adding that it is not allowed. “In accordance with internal rules in place there, the three tourists were expelled, but they were not detained.”

Naked tourism to the 15th-century Peruvian monument has become such a common problem that, in 2014, Peru’s Ministry of Culture declared the exposures “disrespectful” and “unfortunate events that threaten cultural heritage.”

Park rules are now printed on the back of admission tickets and the rules clearly ban nudity onsite. While there aren’t any estimates as to how many tourists per year attempt to bare all at the Peruvian citadel, in 2015 alone, at least 10 tourists were caught taking naked pictures.

It’s estimated that more than 1.2 million tourists visit Machu Picchu every year. However, the tourism site’s own popularity could actually harm it in the long run. In July, officials implemented a new policy of timed tickets to help spread out the flow of visitors. Visitors now must also stay on one of three approved paths instead of exploring trails independently. 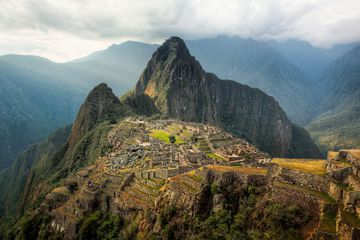