The attraction ignited a Twitter storm of confused reactions upon opening.

A new tourist attraction in London that was mocked from the second it opened is now closing to visitors.

The Marble Arch Mound is closing just six months after it first opened, CNN reported, ending a saga of ridicule and confusion that has followed it since it started welcoming visitors.

The attraction, which reportedly cost £6 million (about $8.1 million) to build, was billed by the city of Westminster as a temporary and "unique opportunity to look out over the area from a new perspective as the Council and its partners start to transform the District."

But from the moment it opened, the public was confused.

The Marble Arch Mound promised visitors a lush, green hill that would rise more than 80 feet high, providing visitors with sweeping views of Hyde Park and bustling Oxford Street. But in reality, those who showed up were greeted with what appeared to be an unfinished project and an absence of shops and a cafe that were advertised but nowhere to be found.

In July, a spokesperson for the architecture firm that built the attraction told The New York Times that changes in the planning forced them to make the mound smaller and steeper, making it harder to plant the vegetation they had envisioned.

Ahead of its closure, Twitter came out in full force, taking one last opportunity to mock the failed project.

"Excellent horticulture is not easy, but makes all the difference. For the price of this 'attraction' we could have funded a generation of world class horticulturalists, who might just make things like this actually work," one person, who said they were a curator at the Cambridge University Botanic Garden, tweeted over the weekend.

Another man tweeted: "went to pay my respects to the Marble Arch Mound before it closes - rip you big lump of mud, still not quite clear why you were built."

While travelers to the UK will no longer be able to visit the mound itself, they can still seek out greenery in England's many picturesque small towns. 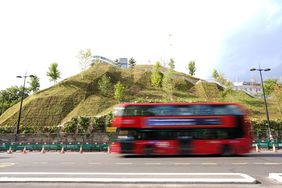