Move over goat yoga, alpaca yoga, and dog yoga. Lemur yoga is about to take the world by storm.

According to The Metro, the Armathwaite Hall Hotel and Spa, near the Lake District Wildlife Park in Keswick, England, is now offering “lemoga,” also known as doing yoga outdoors with lemurs.

The lemurs already live in the nearby wildlife park, and they’re apparently very friendly and social, so they’re practically perfect yoga buddies.

“When you watch lemurs they do some form of the poses naturally — that typical pose warming their bellies in the sunshine,” said Richard Robinson, manager of the Lake District Wildlife Park, to the BBC. “It seemed to be a really good combination to encourage people to have a go and spend time with a lemur.”

The class is part of Armathwaite Hall’s “meet the wildlife” wellness program, which includes walking alpacas around hotels 400-acre grounds, meet-and-greets with meerkats, and special sessions with zookeepers.

The hotel says “lemoga” is a good way for guests to “feel at one with nature, at the same time joining in with the lemurs’ play time.” They also claim the class is good for stress and reducing blood pressure, especially when lemurs are involved.

We challenge anyone not to get distracted by these inquisitive animals while they’re trying to perfect their downward dog. Frankly, these creatures are so irresistibly cute, we expect there could be more “lemoga” classes elsewhere around the world in the future. 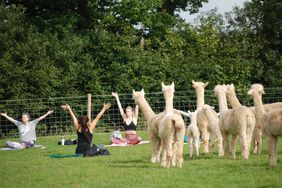 You Can Do Yoga With Cuddly, Adorable Alpacas at This Farm in England