Natural events have created an out-of-this-world diving sight you can explore today.

Nestled in a forested area in the Tian Shan Mountains, Kazakhstan's Lake Kaindy invites those who visit to take a swim in a surreal underwater world.

Created by an earthquake that took place in 1911, the freshwater lake is home to an array of fir trees that not only jet out from its waters, but that call those who take a dive to explore an entire forest sunken under its clear waters.

When the earthquake hit, it created a natural dam that slowly filled with rainwater over the years, leaving the trees that were damaged during the earthquake submerged in the water, according to representatives from Almaty's tourism board.

While the petrified fir trees look just as fascinating jutting out of the depths of the water, what makes the scene all the more fascinating is that they still maintain needles on their branches more than 100 years later, a result of the cooler temperatures in the water that arise from its elevation of over 6,500 feet above sea level.

The lake is a popular location for divers looking to delve into an underwater oasis filled with lush forest remnants, while its clear mountain waters allow you to see into the depths of the lake to make the scene all the more striking.

Take a look at the video below to see what diving in the lake is like:

The lake is also known for its vibrant colors, which shift from turquoise to emerald green — depending on the light — thanks to a variety of minerals like lime that have built up underneath the water overtime.

The 13,120-foot-long lake is located some nine miles from the area's famed Kolsai Lakes and is best to visit from late spring to early fall, when you can also admire the flora and fauna that surrounds it. 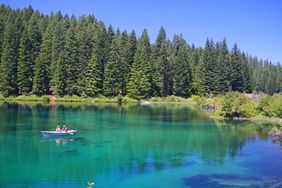 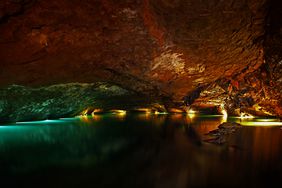