The four-foot statue's large pedestal also is engraved with the names of seven others who died in the crash outside of Los Angeles.

A local artist honored the memories of Kobe and Gianna Bryant, on the second anniversary of their tragic death, while bringing comfort to fans and neighbors of the late basketball legend and his daughter.

Sculptor Dan Medina spent Jan. 26 carrying the 160-pound statue to the spot where Bryant, his teenage daughter, and seven others died in a helicopter crash.

"I decided to bring it up from sunrise to sunset and create a bit of a healing process for fans," Medina told Reuters.

The bronze statue shows Gianna, who went by Gigi, smiling up at a smiling Kobe who's wearing his No. 24 Lakers jersey. The four-foot statue's large pedestal also is engraved with the names of seven others who died in the crash outside of Los Angeles.

The sculpture is also complete with a quote from Bryant that reads, "Heroes come and go, but legends are forever."

The group was headed to a youth basketball tournament when the helicopter crashed in Calabasas, killing everyone on board. At the time, Gigi was just 13 and Kobe was 41.

"I remember when this happened. We live close and we could hear the helicopter," Woodland Hills resident Nicole Szuch-Dinets told Reuters. She was among those who made the 1.3 mile hike to see the statue on the second anniversary of the crash.

"I wanted to come out of respect," she told the news agency.

While the sculpture won't be a permanent fixture at the site, Medina hopes it will inspire city leaders in Los Angeles to build a life-sized version downtown, giving fans who may still be in mourning a chance to honor the memory of the basketball legend. 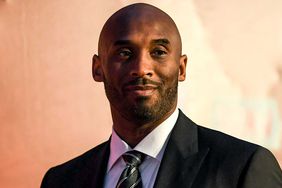