Changi Airport is perhaps the most famous in the world. Its butterfly garden, movie theater and swimming pool make it the layover of dreams — and now there’s even more to gush over.

On April 17, the airport opened a new area called “Jewel,” a 10-story attraction complete with hotel, more than 280 shops and the world’s largest indoor waterfall.

“The vision for Jewel Changi Airport is to be a destination where ‘The World meets Singapore, and Singapore meets the World,’ Hung Jean, the CEO of Jewel Changi Airport Development said in a statement. “The unique proposition of world-class shopping and dining, seamlessly integrated with lush greenery, fulfills the needs of increasingly discerning travelers for a meaningful and experiential journey, even for brief layovers.”

Since its opening, visitors to the Jewel have been stunned by the interweaving of greenery, retail selection and unique design.

"I must confess that before I visited the Jewel in early February this year, I had my doubts about the need for yet another shopping area at Changi Airport, given the shopping opportunities already available at the existing terminals,” Sitoh Yih Pin, chairman of the Government Parliamentary Committee for Transport, told The Straits Times. "Instead, what I found was a beautifully designed garden concept recreational centre which complements the existing airport and exemplifies our position as a garden city.”

The oasis in the middle of Singapore’s transportation hub features an indoor forest. Visitors to the Jewel will be able to cross elevated bridges and walkways, monkey around on an inventive playground (for kids and adults) and meander through a garden with one of the largest indoor collections of plants in Singapore.

If the idea of getting lost in an airport doesn’t terrify you, you can wander through the Jewel’s hedge and mirror mazes or stand near the 130-foot-tall indoor waterfall (with light show) called the Rain Vortex. The entire complex is built to mimic nature and create a sense of calm during busy travel days.

The Jewel isn’t really a place where travelers will rush from gate to gate. Instead of being a terminal itself, it’s more of a “connection” area for travelers, accessible from terminals 1, 2 and 3.

The 130-room YOTELAIR hotel will allow travelers to check in early for their flights and store their bags in order to fully enjoy the complex. Passengers will be able to stop in one of the 280 shops and restaurants that populate the Jewel. The complex will house shops like Marks & Spencer, Muji, Zara, Uniqlo and the largest Nike store in Southeast Asia, according to Business Insider.

The Jewel is ensuring that Singapore’s airport is becoming much, much more than a place to grab a plane — it’s becoming a destination unto itself. 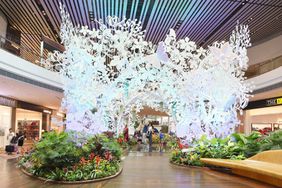 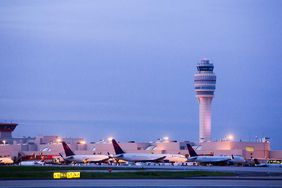 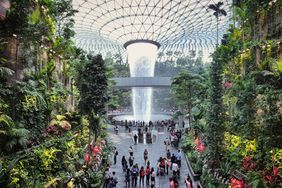