In Japan, spring is an occasion for social outings, serene walks in nature, and plenty of selfies taken next to cherry trees coated in candy-pink blossoms. Sakura matsuri, or cherry blossom festival, is recognized all over Japan in April — but with such a short bloom period, locals must make the most of the splendid show for as long as they can.

"The cherry blossoms appear only for a few weeks," explains Akemi Hayashi, the chef concierge at the Ritz-Carlton Kyoto. Once the first buds open, the festivities officially begin. All eyes are on the light pink florets as they take over city sidewalks, public parks, and fill in temple gardens with vivid bursts of color. During the height of the bloom, the nation partakes in something called hanami, or the centuries-old tradition of picnicking outside, underneath the technicolor trees.

Why is the Cherry Blossom Festival celebrated in Japan?

Not only is sakura the national flower of Japan, the cherry blossoms also take on added spiritual meaning in the context of Buddhist themes of mortality, mindfulness, and living in the present moment.

"Japanese cherry blossoms are a timeless metaphor for human existence," said Hayashi. "Blooming season is powerful, glorious and intoxicating, but tragically short-lived — a visual reminder that our lives, too, are fleeting."

More than just appreciate the beauty of the delicate white-pink flowers, Japan finds literal as well as symbolic meaning in the unique season: some even compare the cherry blossoms' short but memorable life cycle to that of the Japanese warrior spirit, or bushido.

When and where does the Cherry Blossom take place?

This year, travelers are in for a stunning show. While weather agencies around Japan are reporting an earlier than usual sakura season—getting underway as quickly as March 16, in the capital of Tokyo — the good news is that sakura doesn't happen all at once.

Different sections of Japan experience spring at different times: first in the south, and later in the north. In Osaka, the flowering date (kaika) is set for March 21, while up in Aomori, things won't get going until mid-April. So as long as you're able to reach regions like Hokkaido, Tohoku, and Hokuriku, you still have a great chance at spotting the famous cherry blossoms.

Nature is unpredictable, so no two sakura seasons are ever the same. According to the Japan Meteorological Agency, which surveys the blooming periods of sakura in hundreds of locations all over Japan: "The flowering and full bloom dates of cherry blossoms depend on the temperature patterns from autumn of the preceding year. The buds of cherry blossoms are formed during the summer of the preceding year." Because of this, most tour guides advise visitors to continue checking forecast updates prior to their trip.

In Tokyo, one of the most famous places to view the impressive display is Shinjuku Gyoen, a park bearing over 1,000 various species of sakura trees—with impressive views of the skyline to boot. (Meanwhile, if it's an idyllic picnic spot you're after, you can't go wrong showing up with a bento box at the famous Yoyogi Park.)

Over in Kyoto, Nakaragi no Michi Path is perfect for the practice of hanami: the lakeside path leads to the Kyoto Botanical Garden, and along the way you can saunter through lush tunnels of pink flowers.

Further south, in Ehime Prefecture, there's Matsuyama Castle, a stunning setting for winding avenues of consecutive cherry trees; during the first weekend of April, the Matsuyama Spring Festival welcomes all types of flower lovers, for festivities that include a parade, food vendors, and more.

For even more jaw dropping views, head to Senkoji Park in Onomichi city: the site sits atop a mountain, with sweeping views of Japan's natural landscape, not to mention ten thousand sakura trees, in full bloom.

To enjoy cherry blossoms a bit closer to home, you can enjoy Japan's gift to the U.S. in Washington, D.C. Here's all the latest on that festival. 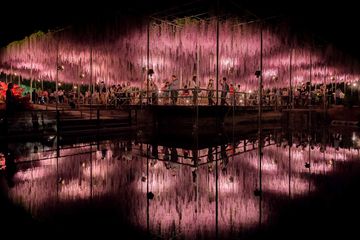 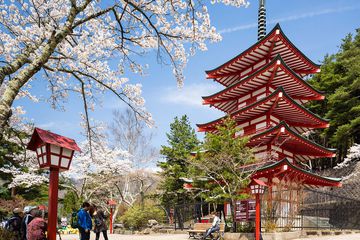 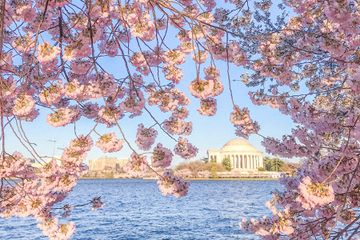 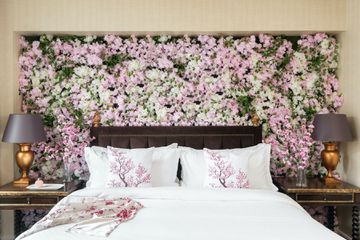 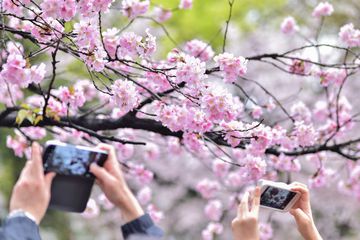 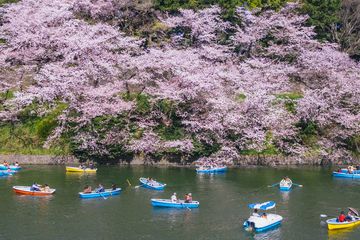 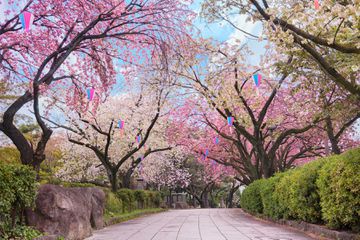 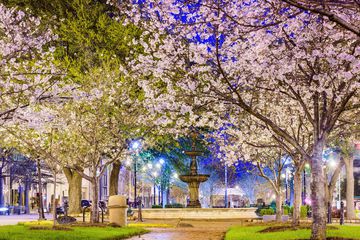 6 Places Besides D.C. Where You Can See Cherry Blossoms This Year