Komodo Island Is Closing to Tourists Because People Are Stealing Dragons

According to Indonesia’s Tempo newspaper, the government will temporarily close the popular tourist attraction in January 2020. A reopening date has not been announced.

During the closure, conservationists will examine the lizards’ food supply, work on preserving endemic plant species, and survey the natural environment. Conservation authorities hope that the closure will help grow the Komodo dragon population.

The closure was announced after the Indonesian Ministry of Environment and Forestry revealed that it had busted a smuggling ring that was going to sell 41 Komodo dragons. The lizards were selling for about $35,000 (500 million rupiah) each.

Komodo dragons are a protected species and considered to be the largest living lizard in the world. It is capable of growing up to 10 feet long and weighing up to 200 pounds. They have a poisonous saliva and can be dangerous — but the World Animal Foundations estimates there are only about 6,000 left in the wild, all concentrated in Indonesia’s Komodo National Park.

This is not the first popular tourist island that has closed for conservation purposes. In 2017, Thailand indefinitely closed four of its islands to protect the coral reefs from overtourism. 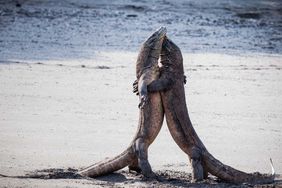