Hawaii has been included on a list of 12 destinations the Japanese government is considering to approve for safe travel.

The office of Governor David Ige said in a press release on Monday that Hawaii is “honored” to be considered safe for travel by Japanese Prime Minister Shinzo Abe and Foreign Minister Toshimitsu Motegi. If approved, the new Japan-Hawaii Safe Travel Program would open a travel corridor between Hawaii and Japan, although details are yet to be determined.

Travel between the two would necessitate a negative COVID-19 test and perhaps an additional health examination upon arrival.

Inclusion on the list does not mean travel corridors between the two destinations are readily open. It simply means that Hawaii is being considered for discussions to move the process forward.

Other destinations Japan has considered for its list are Brunei, Cambodia, China, Hong Kong, Macao, Laos, Malaysia, Mongolia, Myanmar, the Republic of Korea (ROK), Singapore and Taiwan. Hawaii is the only destination in the U.S. that's a possibility for inclusion.

“Similar to Japan, a lot of work has been accomplished to make Hawaii as safe as possible from the spread of the coronavirus since international travel was suspended in March,” House Speaker and Chair of the Japan Hawaii Legislators Friendship Association Scott Saiki said in a statement. “We are getting closer to the point where travel between Japan and Hawaii can be restarted while staying focused on protecting people’s health. When that occurs, it will be a big step forward to reviving a segment that is important to the overall economic health of Hawaii and its people.”

Hawaii was due to launch a pre-travel testing program that would open it up to travelers from the mainland U.S. on Aug. 1, but the start date was pushed back to Sept. 1 after Hawaii saw an uptick in COVID-19 cases. Some Hawaiian islands are considering implementing “tourist bubbles” that would allow tourists to move freely, within set borders.

Hawaii has recorded a total of 1,711 cases of COVID-19 and 26 deaths, according to the state Department of Health. Japan reported about 32,000 COVID-19 cases and 1,000 deaths, Johns Hopkins University data shows. 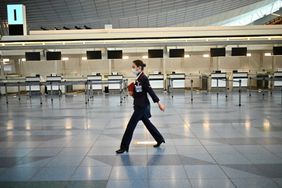 Japan to Remove Travel Ban for 12 Countries Next Month, Including China