A blizzard hitting the Big Island is expected to leave behind more than 12 inches of snow on higher elevations.

The hottest new ski destination is a volcano in Hawaii — yes, you read that right.

A blizzard hitting the Big Island is expected to leave behind more than 12 inches of snow on higher elevations, The New York Times reported. And the peaks of the Big Island's Mauna Loa and Mauna Kea volcanoes each rise to about 14,000 feet.

While blizzard conditions are forecast on elevations of 11,000 feet and higher, The Weather Channel noted that doesn't mean travelers should expect to see snow on the beaches anytime soon. Instead, the rest of the islands will see heavy rain through the middle of the week, bringing with it the threat of flash flooding and potential mud slides.

Snow is not necessarily an uncommon occurrence at the island's higher elevations. But with the National Weather Service predicting wind gusts of more than 100 mph on the summits of the Big Island and more than a foot of snow expected to fall, it's not surprising people around the country were surprised.

Adam Weintraub, a spokesman for the Hawaii Emergency Management Agency, told the Times that the snow has "a very limited set of effects, population-wise," since most of the mountain is not developed.

"We're watching with considerably more concern the rest of the storm system, because it's got the possibility to produce flash floods and landslides," he added.

But one unmistakable perk to the high amount of snow: volcano skiing.

Of course, there are no high-speed chairlifts here: to get to the summit, Langan said he'll rely on his four-wheel drive vehicle.

Hawaii, which lifted restrictions on bars, restaurants, and more last week, allows domestic visitors to skip quarantine if they arrive with proof of a negative test or proof of vaccination as part of its Safe Travels Program. 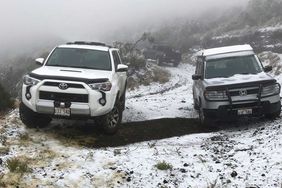