The massive artwork can be found in the city's Little Havana neighborhood.

The mural was created by Miami artist Disem 305 and organized by the nonprofit organization KCULL Life Foundation. The foundation is working to beautify Little Havana's Calle Ocho with celebrations of the Cuban American culture that has grown and thrived there. It was painted on the wall of La Casa del los Trucos, a famous costume shop that has a longtime connection to the famous musical couple.

"Thank you for everything you've done for our community through out [sic] the years and for Blessing us with your talent, art, and creativity," the artist wrote on Instagram. "You've paved the way for Latin artist[s] and creatives across the world and put #Miami on the map from day 1. You're a huge inspiration to me. I hope I did you guys justice through this piece."

Although the famed couple — who became icons of Latin pop with infectious hits like "Conga" and "Rhythm is Gonna Get You" — were not present at the unveiling, the artwork was revealed in a ceremony over the weekend attended by their children, grandchildren, and city officials.

"To me, my parents have always been this big to me, but it's amazing to see them preserved in one of their finest moments in the 80s in Miami," Nayib Estefan, the musical couple's son, told NBC Miami. "I'm very honored, especially because it's connected to Casa de los Trucos, a place where I spent my entire life growing up with my grandparents. Now my son comes here on almost a daily basis so to see this up, it's honestly a magical, amazing thing."

In an acceptance video posted to YouTube, the famed singer explained that the mural was inspired by a photo of the duo during their Miami Sound Machine era, "a time when we were going a lot to La Casa del los Trucos."

"We are so incredibly honored to be receiving this incredible work of art…because I have spent over 40 years going there," she said.

Jorge Torres, manager at La Casa de los Trucos, told NBC Miami that the shop donated the wall to commemorate the Estefans' " lives, their legacy, their family and what they've done to this community, which is incredible and to see them flourish as they have the meteoric rise he had in the 80s." 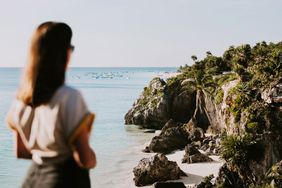