Rock climbing at any age is no easy feat, but Dierdre Wolownick recently decided to up the ante in celebration of her 70th birthday — and broke her own record — by becoming the oldest woman to scale Yosemite National Park's El Capitan.

As the mother of renowned climber Alex Honnold, Wolownick is accustomed to media coverage focused on her son. Now, she's making headlines of her own after picking up rock climbing in her 60s as a way to connect with Honnold.

"That's his entire life," she told CBS News of Honnold, who was featured in the award-winning documentary, "Free Solo" for his free climb of El Capitan.

And one small step at a time is precisely how she completed this challenging climb twice — once in 2017 when she followed Honnold on a journey that took her 13 hours up and six hours down on the Lurking Fear route, and again in September of this year when she embarked on the Descent Route with a group of 10 friends.

"Climbing El Cap at 70 takes its toll, physically, mentally, emotionally. I'm not 'down' yet. Not sure I ever will be, completely," she wrote of the experience on her personal website.

Wolownick described the first third of the journey as a grueling two hours of hiking, where she found herself "grabbing small trees and edges of boulders or whatever else helped," and climbing "over a riverbed filled with boulders." The next third required traveling on four lines up the wall of El Capitan, where "only your core strength keeps you vertical as you ascend." The last leg of the climb was the most intense. "The granite slabs that lead you up that last third stretch for what seems like miles," Wolownick wrote, adding that her thoughts in those moments were the worst part as she imagined herself tumbling 3,200 ft. below.

But in the end, her worst fears did not come to fruition. Wolownick made it to the summit in time to enjoy cupcakes and champagne with the sunset.

Honnold told CBS that his mother may not be the fastest or strongest climber out there, but "she is willing to stick with it for a long, long time and just keep grinding."

"I think she's a perfect example of getting inspired by something, getting passionate about something and discovering it in middle age," he said. 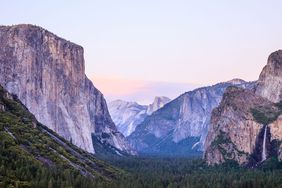 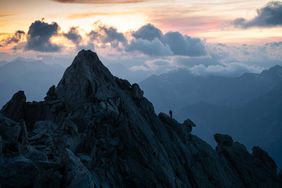 An Adorable 3-year-old Just Became the Youngest Person to Summit This 10,000-foot Mountain